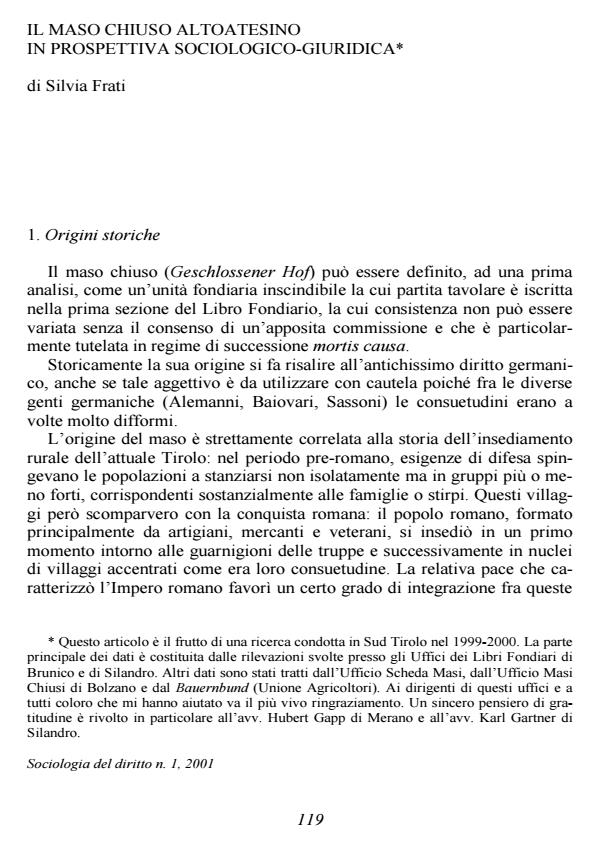 This article details the data gathered in an empirical research project focusing on the time-honoured legal institution of the Tyrolean "Closed Farm" (Geschlossener Hof), the indivisible agricultural holding that has been passed down from father to first-born son for centuries. Referring in particular to Karl Renner’s theory, an attempt was made to understand whether the functioning of the rules that govern this institution has changed over the course of time, reflecting the socio-economic changes that have taken place in the Italian Province of Bozen-Bolzano, which occupies the southern part of the Tyrol, where the Hof system that holds sway is in practice a derogation from the legally obligatory division of inheritance enforced in the rest of Italy. Carried out by analysing the land registers and by collecting qualitative data, the survey made a comparative study of two different geographical area, the Ahrntal (Valle Aurina) and the Vinschgau (Val Venosta), the former Germanic in tradition, the latter more influenced by Roman legal culture. There are still some quite clear differences between these two contexts today, in particular in terms of the different extent of the farms in question and of the different economic usages to which they are put. On the other hand, there are similarities between them in terms of the legal evolution of the institution, which has taken place outside the framework of current law. While local written law makes extremely detailed provision for succession in the property of the farm as a result of the death of its owner, the common practice for many years in both the valleys studied has been to transfer the property by means of an act of sale from the owner to the son chosen to succeed, who, however, according to the information collected by the author, pays the equivalent of its value over to the brothers and sisters who are cut out of the property inheritance. This act among living parties functions substantially as a substitute will and as a functional alternative to the rules of legitimate inheritance. In conclusion, it appears on the one hand that nothing has changed in the way in which this institution functions with regard to maintaining the rural family, which has always been guaranteed by the indivisibility of the land holding, while on the other there is evidence of a separation between the principle of the indivisibility of the land holding and the principle of the prejudice in favour of the first-born son, which appears to be on the way out, as the increasingly frequent presence of female names among the owners of these farms also demonstrates.;