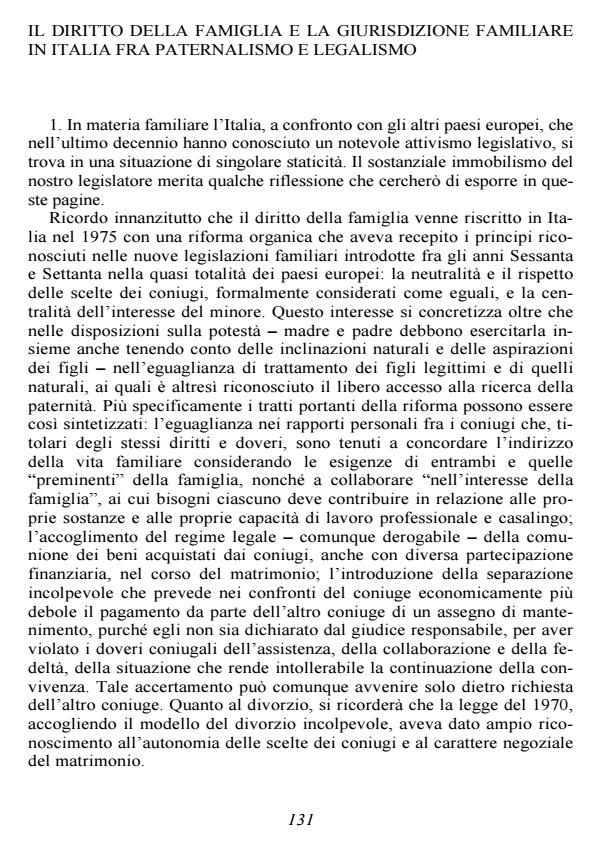 Italy’s Family Legislation was rewritten in 1975 as part of a far-reaching reform that introduced principles of family law already accepted by most other European countries: neutrality and respect for the choices of the spouses, who are formally recognised as equal, the individualisation and privatisation of family relations and the central importance of the interests of children. Since then, sporadic legislation has been introduced to deal with individual subjects, such as adoption and divorce. Unlike what has happened in other European countries, however, the knottiest problems arising from the principles mentioned above have not yet been faced, primarily the ones related to guaranteeing the rights of individual members of the family and to the continuity of relations between children and their parents. One typical trait of Italy’s legal culture in this regard is the paternalistic model often found in the civil law countries in the Mediterranean area, where the judge functions pro-actively to adjust family relations, although this approach has now also been joined by others that tend more to underline the independence of the individual members of the family and their individual rights. Legislation dealing with other problems of some importance, such as rules governing cohabitation, homosexual unions and artificial reproduction, is notable for its complete absence. In addition to this, the further reform of the system of Family Justice, which has been under debate since the introduction of 1975 Reform, is still awaiting approval. All these problems are the subject of a number of legislative proposals considered in the note that also discusses the reasons for this legislative stalemate.;