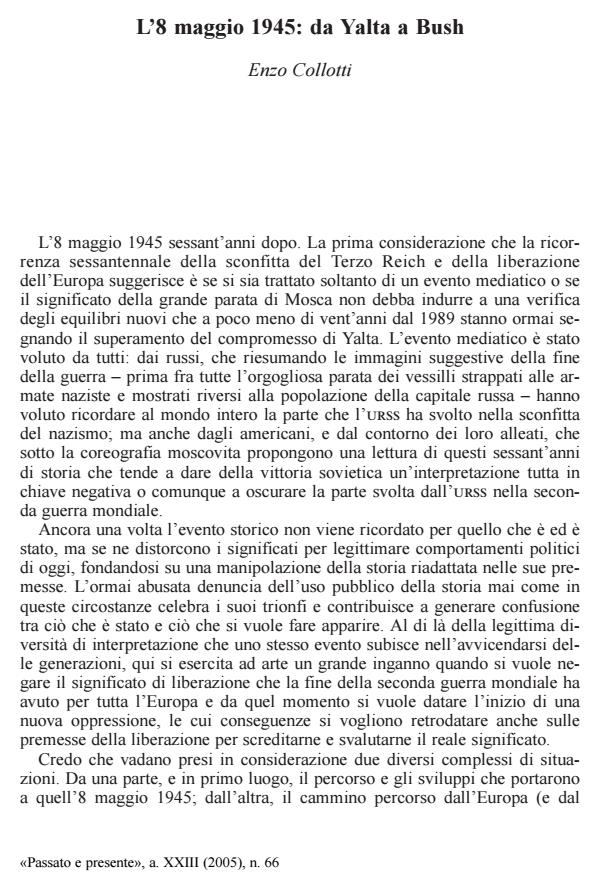 In the Editorial, Enzo Collotti discusses the 60th anniversary of the end of the second world war. The celebration and march-past at Moscow were a major event in the media, to which all the participants Russians, Americans and the allies attributed an importance that went far beyond its historical significance. The date of 8 May 1945 was celebrated not so much for what it meant for international relations and the balance of power in the world, but as a means to legitimate political positions today, exemplifying the classic methods of a public usage of history. Luigi Tomba presents recent works of three well known specialists on China (Lucien Blanco, Guido Samarani, Rudolf Wagner) on the characteristics of the Chinese transition of recent years. It marks the return of the greatest of the Asiatic empires to the role it had occupied until the mid-nineteenth century; and raises questions about the originality of Chinese socialism and the paradox of socialist free trade. Erika Diemoz’s essay explores the imaginary world of fascist Italy through the prolonged crisis of the Matteotti murder. Using newspaper reports and popular accounts, she illustrates the mentalities, experiences and prejudices of the spectators’ participation in the event, pointing to the circular relationship between political intentions and public responses in the construction of social myths and representations. Sara Nocentini discusses the first years of activity of the Italian Institute for Foreign Trade (Ice). Created in 1926 as the Italian Institute for Exports (Ine) in order to improve the balance of trade, it was transformed in 1936, after the sanctions imposed by the League of Nations, with the effect of changing both its structure and role. Following on the new rules affecting imports, exports and exchange rates, it was placed under the rigid control of the government and lost its autonomy. In the Contemporary Historians section, Gabriele Turi offers a profile of Luigi Salvatorelli during the fascist period, concentrating on his highly individual path as a historian and an intellectual. After being forced to resign as deputy editor of La Stampa in 1925, he refused any compromise with the regime: he showed how it was possible to deploy his historical culture in ppropriate newspapers, journals and books through which to continue to uphold an outstanding civil and political discourse, of considerable influence among his readers. In the Historians and History section, the Korean historian Jie-Hyun Lim discusses the representations of East and West that are embedded in the national «Passato e presente», a. XXIII (2005), n. 66 english summary 191 historiography of north-east Asian countries. He concentrates in particular on the two examples of Japan and Korea. Through the analysis of the work of Bulat Okudzava, the first of the Russian bards of dissent, Simone Bellezza recreates the cultural and intellectual atmosphere of the Kruscev thaw in the Ussr, describing the changes in society, the emergence of youth cultures and the birth of public opinion between the Fifties and the Sixties. Ferdinando Fasce reviews the Italian edition of Peter Linebaugh and Marcus Rediker’s The Many-Headed Hydra, originally published in 2000. He stresses the significance of the subtitle of the English edition Sailors, Slaves, Commoners, and the Hidden History of the Revolutionary Atlantic for its relevance to the theme of a rebel Atlantic proletariat, set in the context of the British empire between the 17th and mid-19th century. Aldo Agosti reviews the first complete critical edition, edited by Sandra Teroni and Wolfgang Klein, of the acts of the international Congress of writers in defence of culture, held at Paris in 1935. The congress constituted a significant moment in the reflections of intellectuals about the objectives and strategies of international antifascism. The issue ends with a group of short reviews, edited by Gianni Dore, of recent publications on the theme Africa: colonial experiences and studies.;