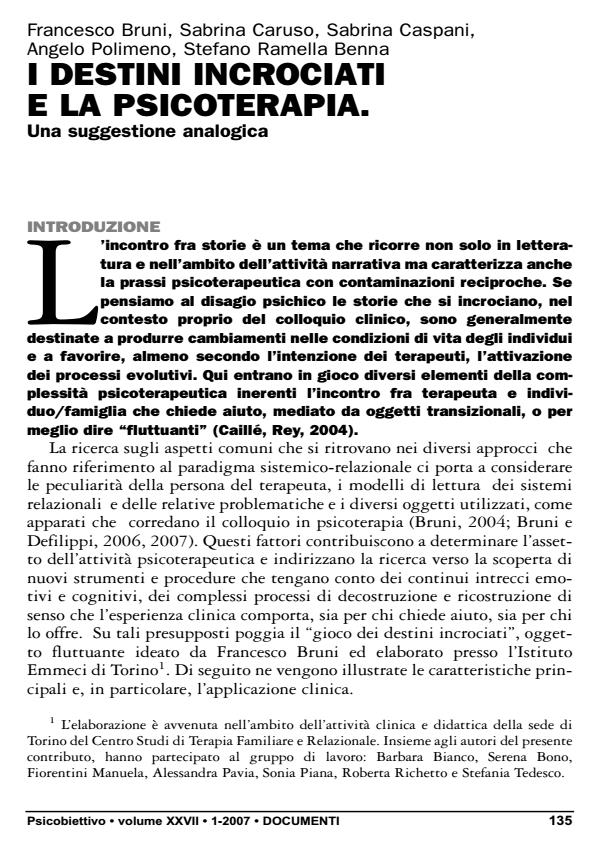 The study takes origin from Italo Calvino’s novel The Castle of Crossed Destinies (1973), in which the narrative begins when a traveller arrives in a castle. The guests soon find out that they are no more able to speak, because of a magic; so, they start using some tarocchi to communicate, creating stories that cross one another, in a game involving everybody. A meeting space between the therapist and the family starts from here, using an analogic language to communicate ad to tell stories relating to the interlaced destinies, inside the therapeutic experience. The described instrument, called The Cards of Crossed Destinies, is composed by 22 cards, showing some known paintings, divided into two groups of 11 cards each. The first group collects some images referring to the steps of family life cycle, while the second one represents some myths that more frequently seem to rise up during therapies. Proposing to couples and families to tell their stories by using the cards, we aim to help them to get out of a linear vision and adopt a circular approach. The instrument has been tried both in a supervision and in a clinical setting. The game of crossed destinies can be used with families in different steps of the therapy, with the aim to let the nature of relationship emerge and to facilitate the narration, but also during the conclusion, in order to elaborate the therapeutic experience. The clinical case presented in the article is referred to a couple therapy: the main phases in which the instrument has been used are described. In training and supervision contexts, a territory takes place, where the trainees and the therapists are able to reflect on their clinical experience, meeting personal resonances emerging inside the relationship with families that ask for a help.;