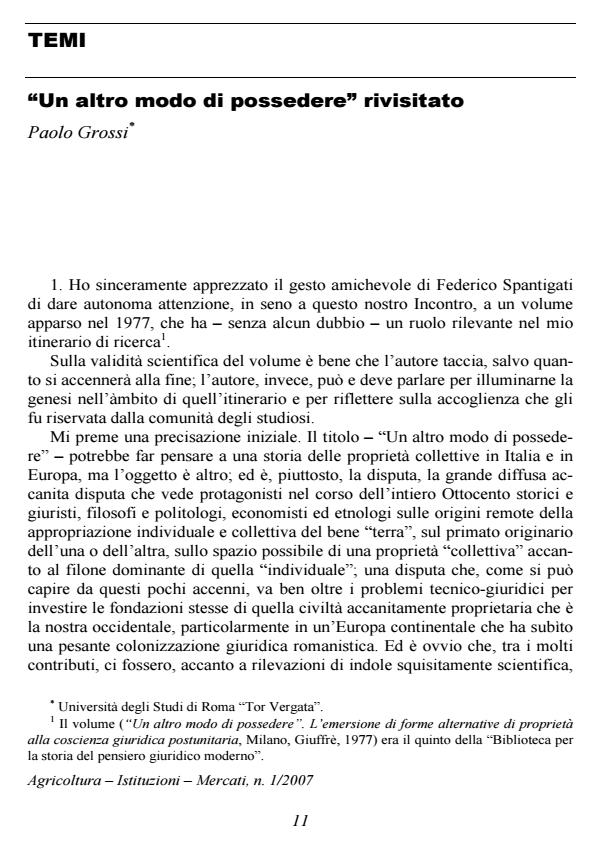 The author illustrates the reasons and motivations that led him to write An Alternative to Private Property: Collective Property in the Juridical Consciousness of the Nineteenth Century. The book, which was published in 1977, concerns the dispute that took place in the 19th century between historians, philosophers, political scientists, economists and ethnologists on the remote origins of both the individual and collective appropriation of land. The debate also relates to the initial pre-eminence of each of these two models, and the possibility of a collective property next to the dominant tradition of the individual one. The dispute has its own, precise cultural dimension, in which two different models of ownership collide. On one hand, there is the individualistic and proprietary culture of the Romans, which shapes the western legal civilisation by linking itself tightly to different political powers in historical succession. By doing so, it assumes official and, at times, even sacral traits. On the other hand, there is a culture that should not be qualified through historically risky identifications as pre-roman, Germanic, or in any other way, and which is geared to detect diversity and otherness from the first one. In the conscience of the 19th century the juxtaposition of two different models created a dialectic in which the proprietary one, which had moulded the juridical society of the middle classes, was put in a difficult situation. This model affirmed its own precise ideological dimension (an obstinate defence of substantial class interests by mystifying them with a search for historical truth): the struggle against any manifestation of collective assets forms the central nucleus of a defensive, and also offensive, strategy both at the legislative and theoretical level.