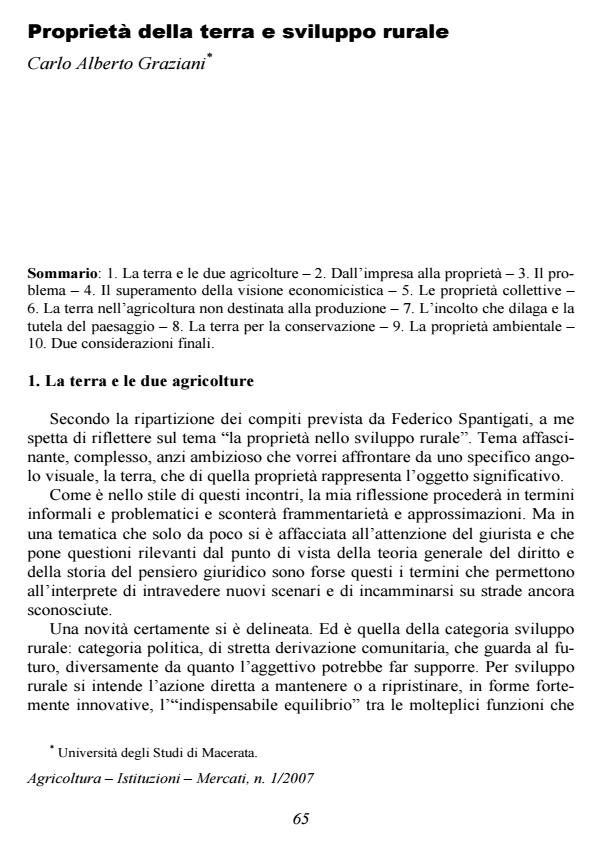 Starting from the consideration that for the first time the pair land-agriculture has been broken, as it has been confirmed by the formulation of article 2135 of the civil code on agricultural enterprises, and that by now there exist two types of agriculture, one that takes care of the land and another one that attacks or even dispenses with it, the author claims that only the first type of agriculture is coherent with the European policy of support to rural development (regulation CE no 1698/2005). He also claims that in order to pursue the objectives of this policy, the land must stop being a mere factor of production and become a value in its own right and, as such, an object that needs to be preserved. Consequently, the central hinge around which the agricultural phenomenon revolves can no longer be offered by the agricultural enterprise. But is it possible, the author wonders, to conceive the land irrespective of its productive function, which is not just structural data but also complies with the dominant interpretation of article 44 of the costitution? Following in the footsteps of Giuseppe Capograssi he replies that it is impossible to reduce our relationship with the land to a mere economic experience. Such an irreducibility can be found in some cases, that share as a common denominator the conservation function and an extraneousness from the economicistic dimension; for those cases, the author hypotesises the category of environmental property. However, contrary to this the history of property and the place of this institution in the constitution seem to demonstrate that the property constitutes an exclusively economic category. This obstacle can be overcome by reflecting on the significance of the tenure, one of the two classical powers that form the content of the property rights (article 832 of the civil code): there are legally relevant forms of tenure that do not imply economic usage. It is precisely in the cases analysed above that the landlord establishes a relationship of tenure with the land as such, as an object on an ideal plane, managing thus to satisfy his deep need to be in communion with nature. In conclusion, the jurist must realise the pervasivity assumed today by the ideal dimension, and hence the necessity for new and more complex approaches. Moreover, with regards to the ownership of land, such a dimension opens the article 44 of the costitution to the possibility of new and attractive interpretations.