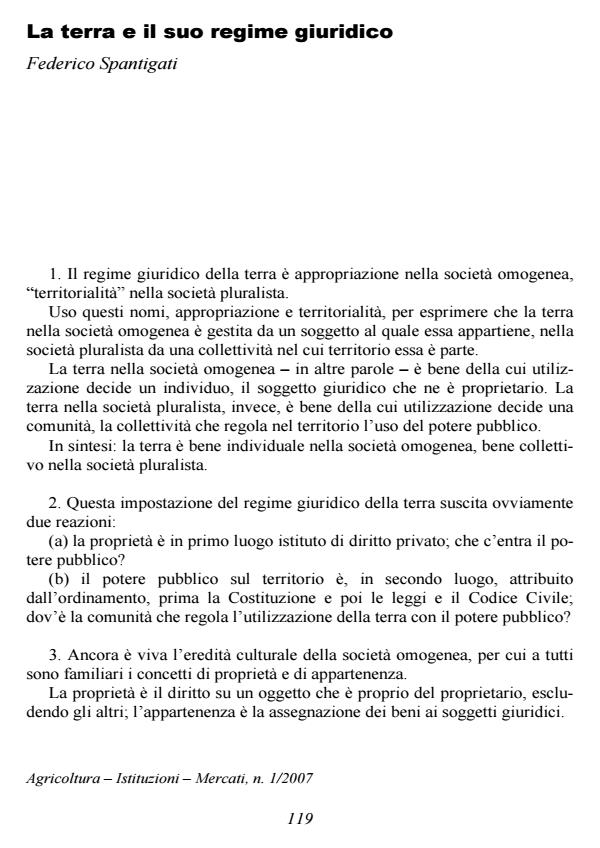 The author analyses and compares the juridical regime of land in the two different models of the homogeneous society and pluralistic society. The juridical regime of land corresponds to appropriation in the homogeneous society: the land is an individual good managed by a subject to which it belongs and which decides its use. In the pluralistic society the land is a collective good, managed by the community in which the land is situated. In the homogeneous society the efficacy of the law depends on the use of strength, or rather power, and the institution of land property is created in order to give decisive powers to the interest of the landlord. In the pluralistic society, on the other hand, the efficacy of the law depends on the compatibility of the objectives, that is the pluralism of interests, which need themselves to be mitigated. Consequently, land management is an institution the result of which is unpredictable a priori: each interest has its own objective (money, nature, aesthetics, historical tradition, quality of products etc.) and the mitigation of the objectives does not depend on a single interest but is the product of dynamics which are not determined a priori. Today the power to use land is limited and functionalised: the efficacy of different behaviours is not produced by a single will, either individual or collective, but by the combined interventions of the different interests that compare objectives and behaviours. The juridical regulation produced by the mitigation of the plurality of interests is not based on the attribution of juridical tutelage, given by private law, to everyone’s objectives. Rather, it is based on the dynamics of their actions and their relationship with the power apparatus. According to the author, there exist structures of political power that can already intervene efficiently to establish a juridical regime of land use on their territory, by using powers exercised de facto by municipalities, mountain communities, park authorities, assets for public use, and citizen associations of collective interests. An illustration is provided by the 5 Terre, a community with a land management policy in which both land property and private activities concur. The community has an apparatus of public power in which the powers of the park and the remit of the municipalities are perfectly integrated, mitigating the presence of the objectives of different interests. The park of the 5 Terre is not an example that can be generalised, but it provides a model according to which the system can be modified.