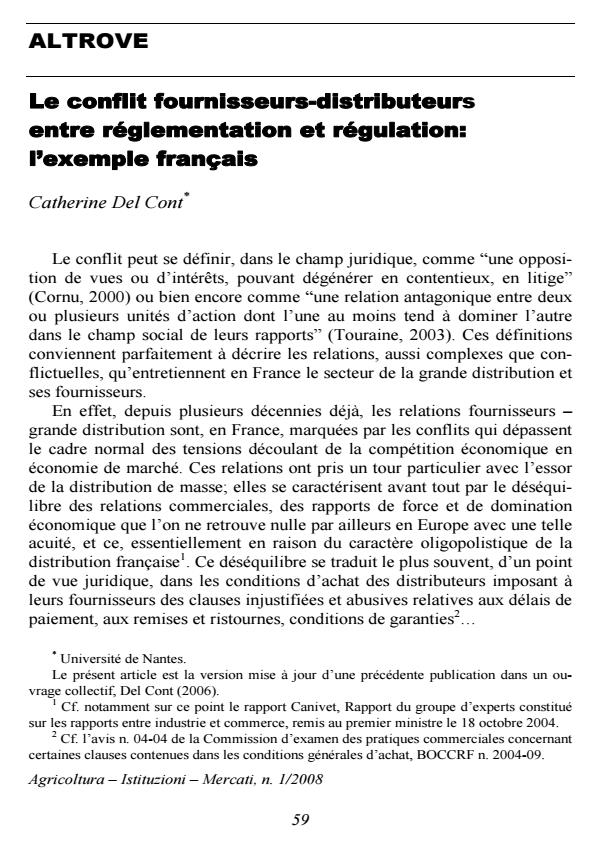 <em>The Supplying Groups-Retailing Groups Disagreement Regarding Policy and Regulation: the French Instance</em> - During the last 30 years in France, relations between power retailers and their suppliers have been heavily imbalanced ones. Very strong conflicts have marked the relations between retailers and suppliers during that period of time, but these conflicts are on a much more violent than those usually created by standard economic competition. It is also worth mentioning that the aforementioned conflict is of particular importance and relevance on the French economic, legal and political scenes. For more than 30 years up to now, various parliamentary reports have been drafted and various pieces of legislation have been passed, all in an attempt to prevent potential litigations and regulate these commercial relations. Nevertheless, the relation between retailers and suppliers is still a very confrontational one in spite of the numerous legislative and political actions that have been undertaken to date. Indeed, these interventions have been ineffective as well as inefficient. This legislative action is based upon 2 different prescriptive templates: public regulation and negotiated-regulation. These public and negotiated regulations are part of a body of rules whose objectives are ones of economic policies (in particular policies aimed to fight against prices increase), objectives which are in fact external to the retailer-supplier conflict itself. Key words: relation suppliers-retaillers, public regulation, negociated regulation.