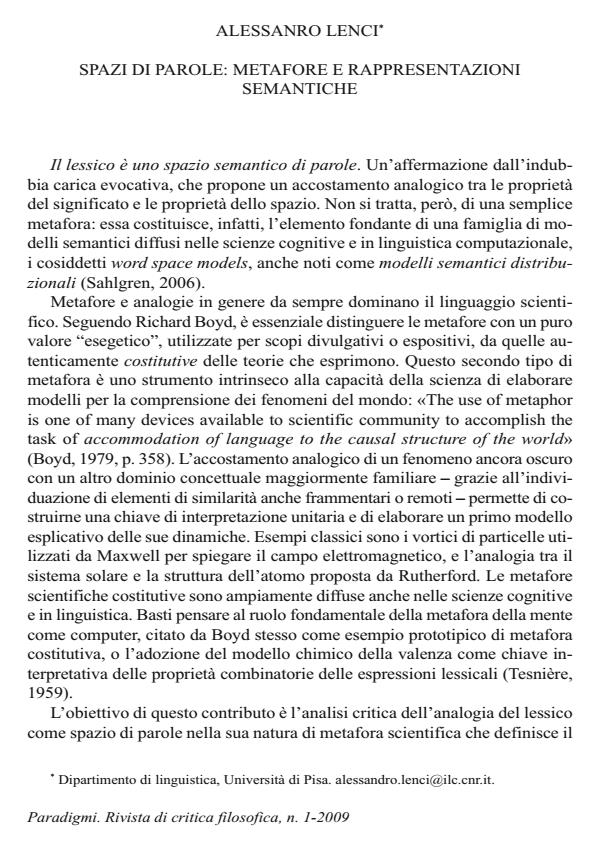 Spaces of Words. Metaphors and Semantic Representations - The aim of this paper is to analyse the analogy of the lexicon with a space defined by words, which is common to a number of computational models of meaning in cognitive science. This can be regarded as a case of constitutive scientific metaphor in the sense of Boyd (1979) and is grounded in the so-called Distributional Hypothesis, stating that the semantic similarity between two words is a function of the similarity of the linguistic contexts in which they typically co-occur. The meaning of words is represented in terms of their topological relations in a high-dimensional space, defined by their combinatorial behaviour in texts. A key consequence of adopting the metaphor of word spaces is that semantic representations are modelled as highly context-sensitive entities. Moreover, word space models promise to open interesting perspectives for the study of metaphorical uses in language, as well as of lexical dynamics in general. Keywords: Cognitive sciences, Computational linguistics, Distributional models of the lexicon, Metaphor, Semantics, Word spaces.