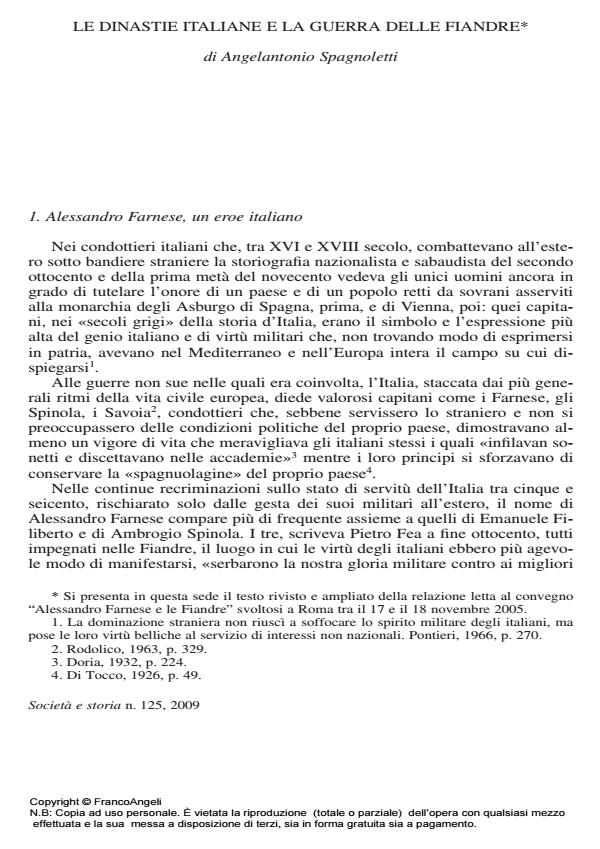 Italian dynasties and the War of the Flanders - In this essay the author deals with the Italian princes and noblemen who took part in the war of the Flanders. In the second half of the eighteenth century and the first half of the nineteenth century the nationalist historiography considered them as the only men who were still able to preserve the honour of a nation ruled by the sovereigns who were subject to Spain. Emanuele Filiberto, Alessandro Farnese and Ambrogio Spinola were good examples of an invincible fighting spirit. In fact, the Italians held an important position in the multinational Spanish army; many southern princes and barons often went to the Flanders with their families. In many cases they had received the baptisim of fire under the orders of don Giovanni of Austria, during the historical period starting from the battle of Lepanto to the conquest of Tunis, The author emphasizes that the presence of many foreign princes and noblemen in the military encampments and battlefields of the Flanders forced them to follow precise and codified rules of behaviour belonging to the courtly world. Such rules couldn’t be avoided. Moreover, the military experience abroad had a deep effect on their future destiny. The Kings’gratitude towards the Italians who returned from the Flanders was rewarded with public posts and honours, however it was limited due to the fact that those had been foreign battles.;