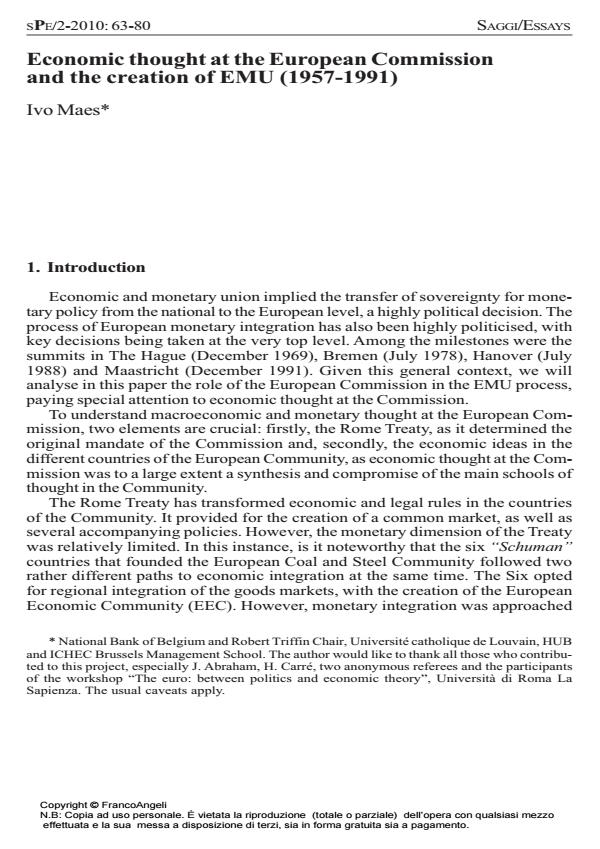 To understand macroeconomic and monetary thought at the European Commission, two elements are crucial: firstly, the Rome Treaty, as it determined the mandate of the Commission and, secondly, the economic ideas in the different countries of the European Community, as economic thought at the Commission was to a large extent a synthesis and compromise of the main schools of thought in the Community. Initially, economic thought at the Commission was mainly a fusion of French and German ideas, with a certain predominance of French ideas. Later, Anglo-Saxon ideas would gain ground. At the beginning of the 1980s, the Commission’s analytical framework became basically medium-term oriented, with an important role for supply-side and structural elements and a more cautious approach towards discretionary stabilisation policies. This facilitated the process of European integration, in the monetary area too, as consensus on stabilityoriented policies was a crucial condition for EMU. Over the years, the Commission has taken its role as guardian of the Treaties and initiator of Community policies very seriously, not least in the monetary area. It has always advocated a strengthening of economic policy coordination and monetary cooperation. In this paper, we first focus on the different schools which have been shaping economic thought at the Commission. This is followed by an analysis of the Rome Treaty, especially the monetary dimension. Thereafter, we go into the EMU process and the initiatives of the Commission to further European monetary integration. We will consider three broad periods: the early decades, the 1970s, and the Maastricht process.