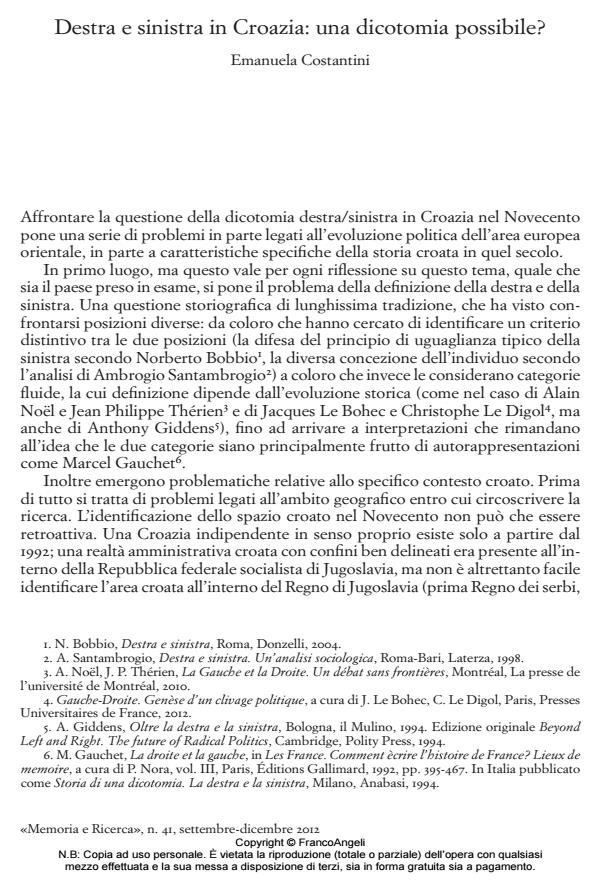 The designations of left and right assumed different meanings in Croatia during the Twentieth century. Before the Second World War the national problem was a focal point in Croatian politics. It cut across the political system since it was the focus of action of very different parties. Issues traditionally identifying right and left, such as social action or ideology, emerged very slowly only in the Twenties. In the Communist period right and left were not present in Croatia as alternative political parties, but the use of the two categories was very important for Communist regime. Its self-representation as the left implied rejecting everything that was considered right. In a way, right and left were nevertheless present within the Communist Party, as a reformist wing conflicted with the old group in power. The breaking up of Yugoslavia was accompanied by the creation of a multiparty system in Croatia. At that time, a competition between left and right seemed possible. Given the regional conflicts Croatia was involved in, the national issue became central again. While the left tried to show its difference from the past by adopting Western patterns, the right brought back old values and almost exclusively focused on the national issue. The war deeply influenced Croatia’s transition to a multiparty system, turning it into a de facto blocked political structure. Things were to change only after the death of the cumbersome Croatian President Tudjman in 1999.