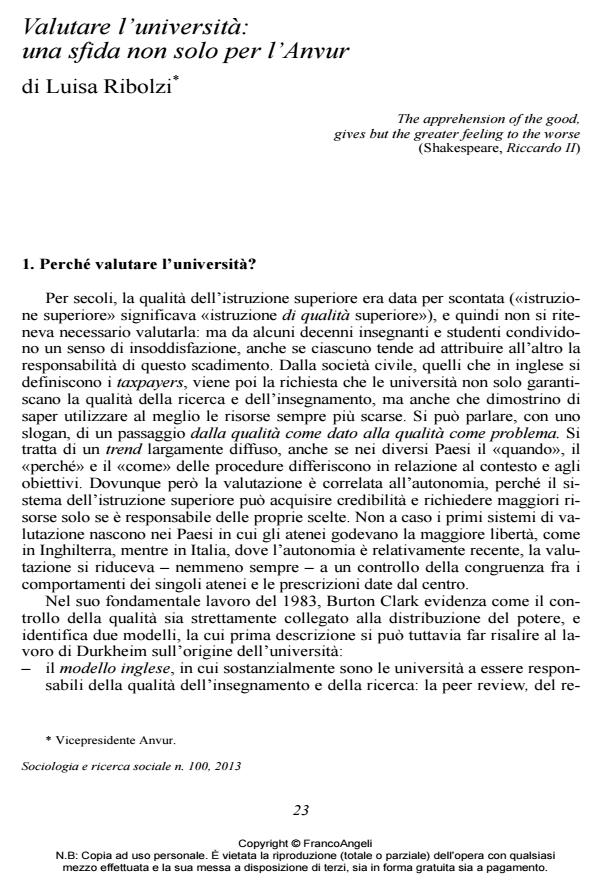 National system to evaluate universities started in Europe at the very beginning of 80’s. In that period the growing number of students and the consequent changes in their composition moved the universities from «quality as a fact» to «quality as a problem». In the same time, the need for accountability was a challenge both for the governance and for the Governments, that adopted two different model of evaluating: a direct control or a control through a national independent agency. This paper, starting from Italian experience of Anvur, defines the aims of evaluating universities and research, related to the social role of higher education. It presents the actors, contents and methods (the «who, what, how») of the evaluation process, based on quality assurance and internal assessment, enhancing both technical and cultural problems and perspectives of an issue quite new for Italian universities. The recent introduction by law of research assessment in the Italian academic system has triggered a wide debate especially focused on its weakness and paradoxes as well as its potential negative effects on disciplinary autonomy and freedom of research. Contrary to this vision, in this paper I argue that evaluation mechanisms should be welcomed in those disciplinary fields - as sociology in Italy - which for historical, cultural and political causes have not been able to organize themselves as scientific communities, i.e. as communities of practice grounded on peer control and evaluation. The paper offers a brief sociological analysis of the social organization of Italian academic sociology, highlighting the deleterious effects on scientific communication and value recognition fostered by its segmentation in mutually exclusive, sometimes conflicting sometimes colluding, corporate groups (so called «component»). Far from being an assault on its freedom and autonomy, a state-backed system of evaluation may be instrumental to the creation and legitimation of a disciplinary culture of self evaluation and value assessment according to transparent, institutionalized and not provincial quality standards.