Accounting Theory and Accounting Practice as Loosely Coupled Systems: A Historical Perspective on the Italian Case (1930-1990) 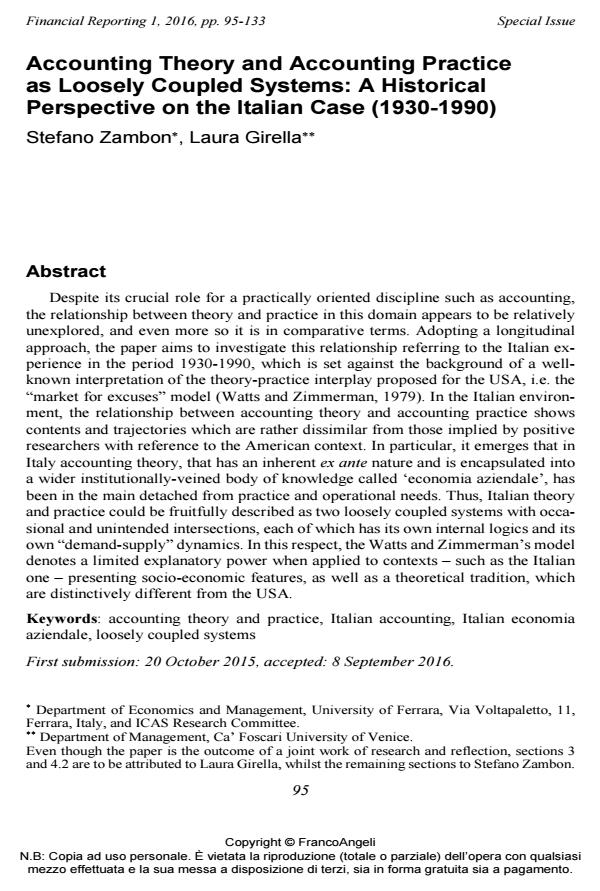 Despite its crucial role for a practically oriented discipline such as accounting, the relationship between theory and practice in this domain appears to be relatively unexplored, and even more so it is in comparative terms. Adopting a longitudinal approach, the paper aims to investigate this relationship referring to the Italian experience in the period 1930-1990, which is set against the background of a well-known interpretation of the theory-practice interplay proposed for the USA, i.e. the "market for excuses" model (Watts and Zimmerman, 1979). In the Italian environment, the relationship between accounting theory and accounting practice shows contents and trajectories which are rather dissimilar from those implied by positive researchers with reference to the American context. In particular, it emerges that in Italy accounting theory, that has an inherent ex ante nature and is encapsulated into a wider institutionally-veined body of knowledge called ‘economia aziendale’, has been in the main detached from practice and operational needs. Thus, Italian theory and practice could be fruitfully described as two loosely coupled systems with occasional and unintended intersections, each of which has its own internal logics and its own "demand-supply" dynamics. In this respect, the Watts and Zimmerman’s model denotes a limited explanatory power when applied to contexts - such as the Italian one - presenting socio-economic features, as well as a theoretical tradition, which are distinctively different from the USA.