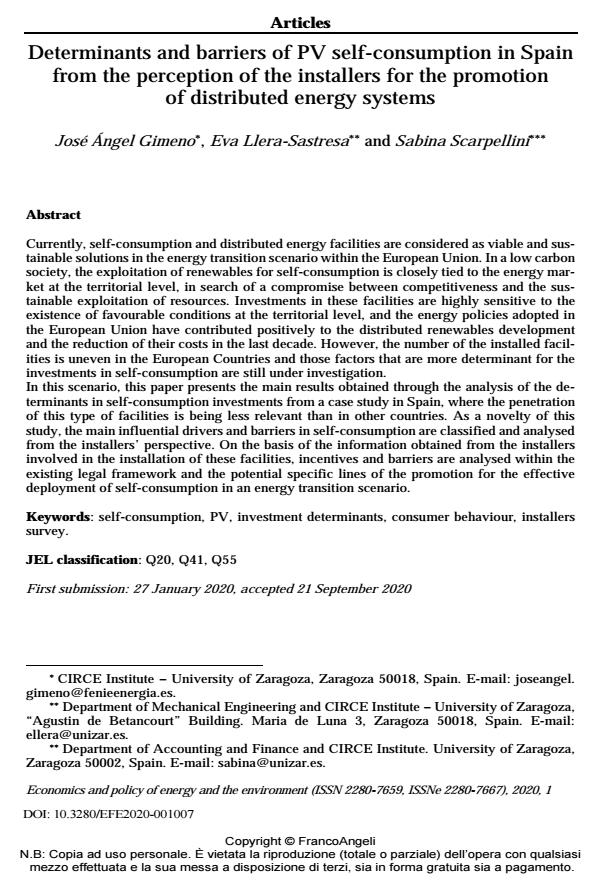 Currently, self-consumption and distributed energy facilities are considered as viable and sustainable solutions in the energy transition scenario within the European Union. In a low carbon society, the exploitation of renewables for self-consumption is closely tied to the energy market at the territorial level, in search of a compromise between competitiveness and the sustainable exploitation of resources. Investments in these facilities are highly sensitive to the existence of favourable conditions at the territorial level, and the energy policies adopted in the European Union have contributed positively to the distributed renewables development and the reduction of their costs in the last decade. However, the number of the installed facilities is uneven in the European Countries and those factors that are more determinant for the investments in self-consumption are still under investigation. In this scenario, this paper presents the main results obtained through the analysis of the determinants in self-consumption investments from a case study in Spain, where the penetration of this type of facilities is being less relevant than in other countries. As a novelty of this study, the main influential drivers and barriers in self-consumption are classified and analysed from the installers’ perspective. On the basis of the information obtained from the installers involved in the installation of these facilities, incentives and barriers are analysed within the existing legal framework and the potential specific lines of the promotion for the effective deployment of self-consumption in an energy transition scenario.

José Ángel Gimeno, Eva Llera Sastresa, Sabina Scarpellini, Determinants and barriers of PV self-consumption in Spain from the perception of the installers for the promotion of distributed energy systems in "ECONOMICS AND POLICY OF ENERGY AND THE ENVIRONMENT" 1/2020, pp 153-169, DOI: 10.3280/EFE2020-001007