Platform social enterprises as a new model for co-production 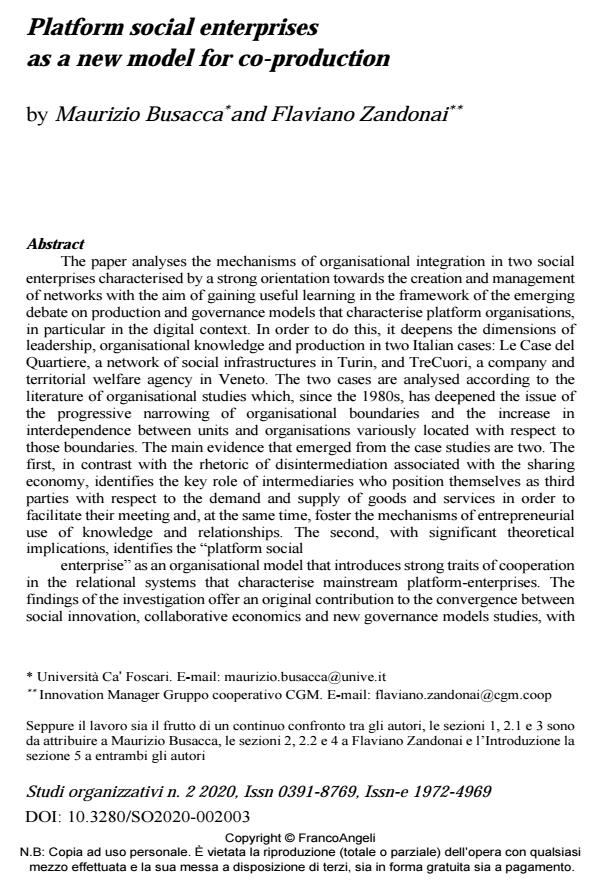 The paper analyses the mechanisms of organisational integration in two social enterprises characterised by a strong orientation towards the creation and management of networks with the aim of gaining useful learning in the framework of the emerging debate on production and governance models that characterise platform organisations, in particular in the digital context. In order to do this, it deepens the dimensions of leadership, organisational knowledge and production in two Italian cases: Le Case del Quartiere, a network of social infrastructures in Turin, and TreCuori, a company and territorial welfare agency in Veneto. The two cases are analysed according to the literature of organisational studies which, since the 1980s, has deepened the issue of the progressive narrowing of organisational boundaries and the increase in interdependence between units and organisations variously located with respect to those boundaries. The main evidence that emerged from the case studies are two. The first, in contrast with the rhetoric of disintermediation associated with the sharing economy, identifies the key role of intermediaries who position themselves as third parties with respect to the demand and supply of goods and services in order to facilitate their meeting and, at the same time, foster the mechanisms of entrepreneurial use of knowledge and relationships. The second, with significant theoretical implications, identifies the "platform social enterprise" as an organisational model that introduces strong traits of cooperation in the relational systems that characterise mainstream platform-enterprises. The findings of the investigation offer an original contribution to the convergence between social innovation, collaborative economics and new governance models studies, with a shift from "platform capitalism" to "platform cooperativism" by organizations that use place-based social innovation models and give importance not only to relational and political-cultural factors, but also to co-production, co-working, collaboration and networking. Observed from this perspective, the platform social enterprise becomes a model to be more considered in order to propose a more cooperative, sustainable and democratic development trajectory of platforms.