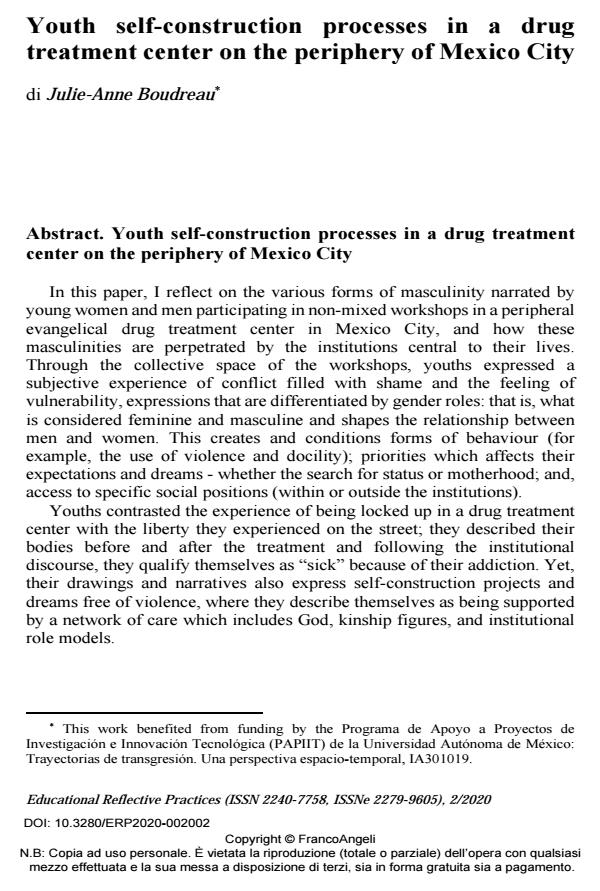 In this paper, I reflect on the various forms of masculinity narrated by young women and men participating in non-mixed workshops in a peripheral evangelical drug treatment center in Mexico City, and how these masculinities are perpetrated by the institutions central to their lives. Through the collective space of the workshops, youths expressed a subjective experience of conflict filled with shame and the feeling of vulnerability, expressions that are differentiated by gender roles: that is, what is considered feminine and masculine and shapes the relationship between men and women. This creates and conditions forms of behaviour (for example, the use of violence and docility); priorities which affects their expectations and dreams - whether the search for status or motherhood; and, access to specific social positions (within or outside the institutions). Youths contrasted the experience of being locked up in a drug treatment center with the liberty they experienced on the street; they described their bodies before and after the treatment and following the institutional discourse, they qualify themselves as "sick" because of their addiction. Yet, their drawings and narratives also express self-construction projects and dreams free of violence, where they describe themselves as being supported by a network of care which includes God, kinship figures, and institutional role models.