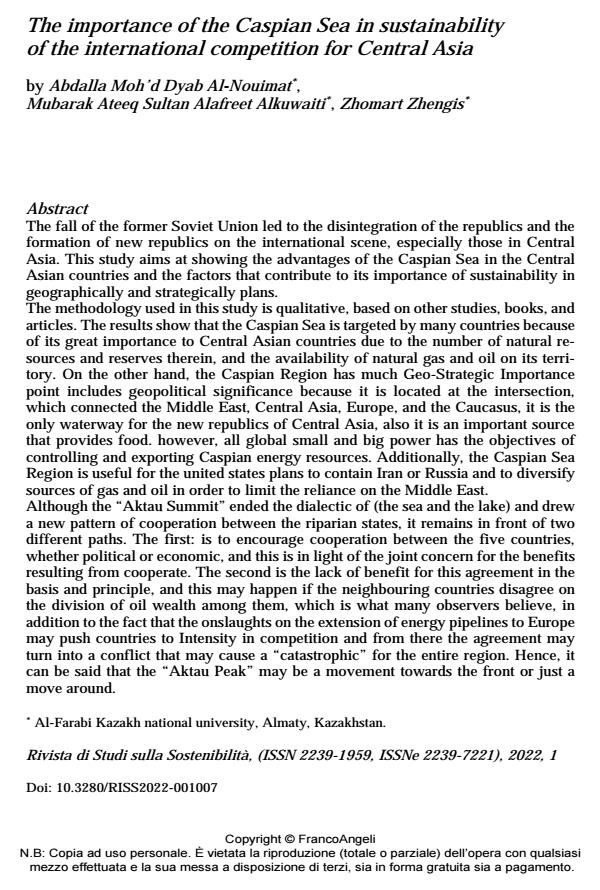 The fall of the former Soviet Union led to the disintegration of the republics and the formation of new republics on the international scene, especially those in Cen-tral Asia. This study aims at showing the advantages of the Caspian Sea in the Central Asian countries and the factors that contribute to its importance of sus-tainability in geographically and strategically plans. The methodology used in this study is qualitative, based on other studies, books, and articles. The results show that the Caspian Sea is targeted by many countries because of its great importance to Central Asian countries due to the number of natural resources and reserves therein, and the availability of natural gas and oil on its territory. On the other hand, the Caspian Region has much Geo-Strategic Importance point includes geopolitical significance because it is located at the in-tersection, which connected the Middle East, Central Asia, Europe, and the Cauca-sus, it is the only waterway for the new republics of Central Asia, also it is an im-portant source that provides food. however, all global small and big power has the objectives of controlling and exporting Caspian energy resources. Additionally, the Caspian Sea Region is useful for the united states plans to contain Iran or Russia and to diversify sources of gas and oil in order to limit the reliance on the Middle East. Although the "Aktau Summit" ended the dialectic of (the sea and the lake) and drew a new pattern of cooperation between the riparian states, it remains in front of two different paths. The first: is to encourage cooperation between the five countries, whether political or economic, and this is in light of the joint concern for the benefits resulting from cooperate. The second is the lack of benefit for this agreement in the basis and principle, and this may happen if the neighbouring countries disagree on the division of oil wealth among them, which is what many observers believe, in addition to the fact that the onslaughts on the extension of energy pipelines to Europe may push countries to Intensity in competition and from there the agreement may turn into a conflict that may cause a "cata-strophic" for the entire region. Hence, it can be said that the "Aktau Peak" may be a movement towards the front or just a move around. Just as the seriousness of the political equilibrium between the countries of the re-gion, its is extremely unfortunate to know that the "Aktau Summit" did not ad-dress the issue of protecting the vital environment of the Caspian Sea and its di-versity, and this serious issue has not received the necessary international attention so far.