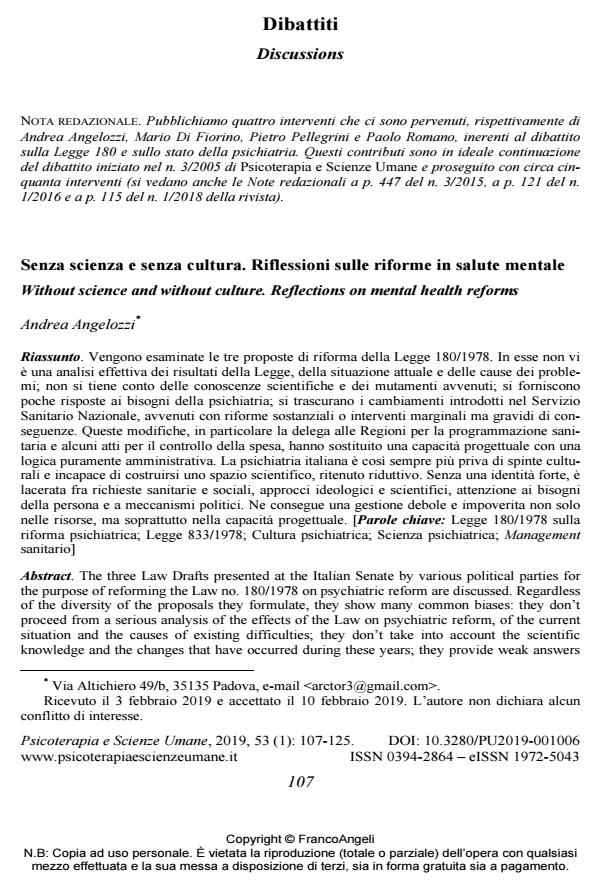 The three Law Drafts presented at the Italian Senate by various political parties for the purpose of reforming the Law no. 180/1978 on psychiatric reform are discussed. Regardless of the diversity of the proposals they formulate, they show many common biases: they don’t proceed from a serious analysis of the effects of the Law on psychiatric reform, of the current situation and the causes of existing difficulties; they don’t take into account the scientific knowledge and the changes that have occurred during these years; they provide weak answers to the real needs of psychiatry in Italy today. These Law Drafts ignore the progressive changes introduced in the last 40 years aiming at reforming the National Health System; in some cases these changes brought about substantial reforms, but more often introduced interventions on marginal aspects, yet of great impact in their consequences. These changes, in particular the delegation of powers to the Regions concerning health planning and a series of acts adopted by the Government aimed at budget control and spending review, have replaced a capacity for ambitious cultural projects with a poor administrative mentality in every sector of the health system, so that it becomes almost impossible to address the real problems. These changes have wide effects on Italian psychiatry, which in the years following the Law of Reform no. 180/1978 increasingly lacks of a wider cultural perspective and is unable to build a scientific space for itself, because a scientific view would be considered too narrow and unable to include cultural factors. Today’s Italian psychiatry, without a wider cultural perspective and a scientific view, is without identity and it is torn between health requests and social demands, between ideological and scientific approaches, between attention to the needs of the people and attention to the political mechanisms of health organization. It is thus transformed into a weak and flat management, poor not only in resources but above all in planning capacity.