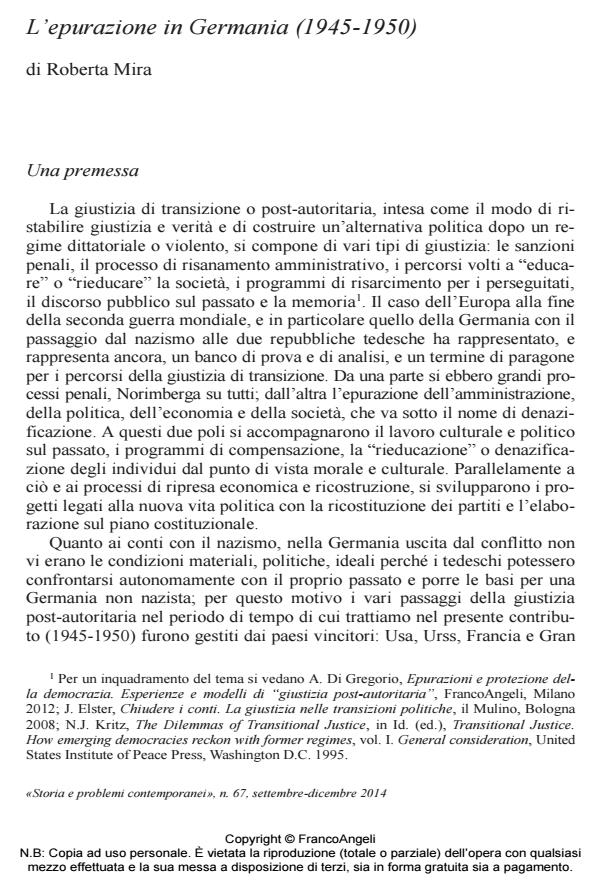 The article discusses the early years after World War II in defeated Germany, focusing not so much on the punishment of Nazi criminals and on issues related to the trial held by the International Military Tribunal at Nuremberg and the subsequent criminal proceedings, as on the more general process of denazification of the country. The essay presents the main acquisitions of the mainly German-speaking historiography, to provide the Italian public with information on a subject that remains largely inaccessible in Italy.After a brief part on criminal justice, the article examines the denazification in the four occupation zones into which Germany was divided after the war. In the first three zones, the US -especially -, British and French - with some caveats - started a purge campaign that would allow them to remove National-socialism from wide areas of Germany’s administration and society; but this campaign soon ran aground due to material difficulties and to changes in the international political scenery. The denazification was progressively mitigated and most of the Germans were classified as mere Nazi-sympathizers, who went largely absolved. In the Soviet zone apparently the purge had a greater success, but even in this area the denazification process was inconsistent and, as in the West zones, it was tied to the international and internal politics.;