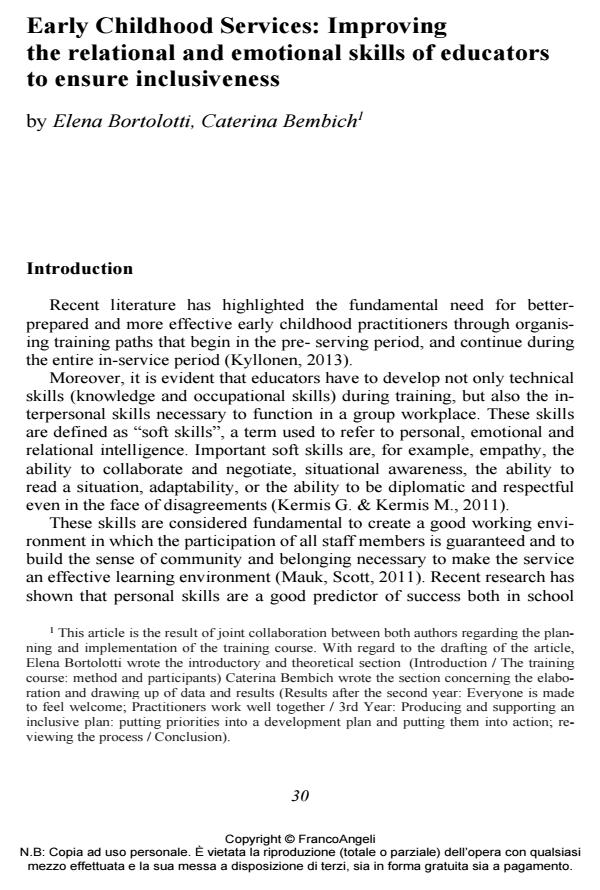 The paper describes a training course conducted in the city of Trieste with a large group of educators, who work in Early Childhood Services, with the aim of promoting the process of inclusiveness. We worked for three year with practitioners using a data collection tool (the Index for Inclusion created by Ainscow and Booth, 2006), that provided the opportunity to the staff to discuss and reflect on many issues regarding the ability to create a welcoming work environment for all. As the project progressed, it became evident that the teachers and aides involved were using the Index for Inclusion not only to evaluate the progress regarding relation among the children, but also as a tool of self-evaluation and reflection. It became obvious that a there was a lack of good practices in the dynamics between the adult professionals and this lack created significant obstacles to inclusion. The data collected highlighted the need to create strategies and practices to help staff to improve soft skills like the ability to collaborate and negotiate, to be diplomatic and respectful even in the face of disagreements, to feel good in a team, and to share some common goals. On the basis on these results, it appeared crucial during the third year of training, to work with the staff in small groups. The topics of discussion selected by the groups refer to the analysis of some experiences which were considered significant to examine, related to relationship problems that create difficulties and problems for interactions between practitioners. Each discussion was concluded with the drafting of a final proposal and a shared document that further explained some thoughts expressed by the community, describing the principles governing the organization and membership of a community. The introduction of the Index was a revelation of sorts. The topics the Index touched upon were those areas in need of improvement and were reflective of the actual, daily situations found in schools as work places.