Planning in Britain during and immediately after the Second World War: planners, processes and plans 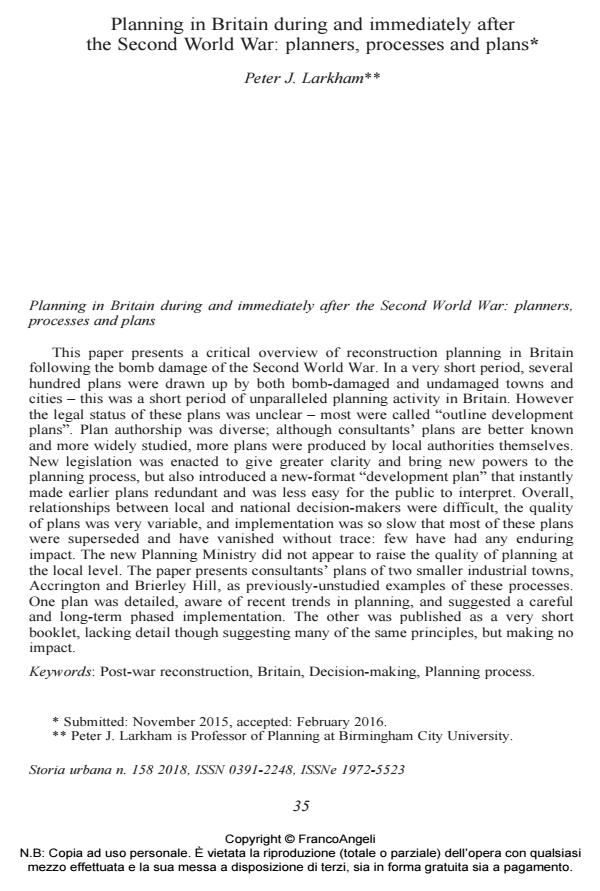 This paper presents a critical overview of reconstruction planning in Britain following the bomb damage of the Second World War. In a very short period, several hundred plans were drawn up by both bomb-damaged and undamaged towns and cities - this was a short period of unparalleled planning activity in Britain. However the legal status of these plans was unclear - most were called "outline development plans". Plan authorship was diverse; although consultants’ plans are better known and more widely studied, more plans were produced by local authorities themselves. New legislation was enacted to give greater clarity and bring new powers to the planning process, but also introduced a new-format "development plan" that instantly made earlier plans redundant and was less easy for the public to interpret. Overall, relationships between local and national decision-makers were difficult, the quality of plans was very variable, and implementation was so slow that most of these plans were superseded and have vanished without trace: few have had any enduring impact. The new Planning Ministry did not appear to raise the quality of planning at the local level. The paper presents consultants’ plans of two smaller industrial towns, Accrington and Brierley Hill, as previously-unstudied examples of these processes. One plan was detailed, aware of recent trends in planning, and suggested a careful and long-term phased implementation. The other was published as a very short booklet, lacking detail though suggesting many of the same principles, but making no impact.