An exploratory study on the construction of networks in social farming 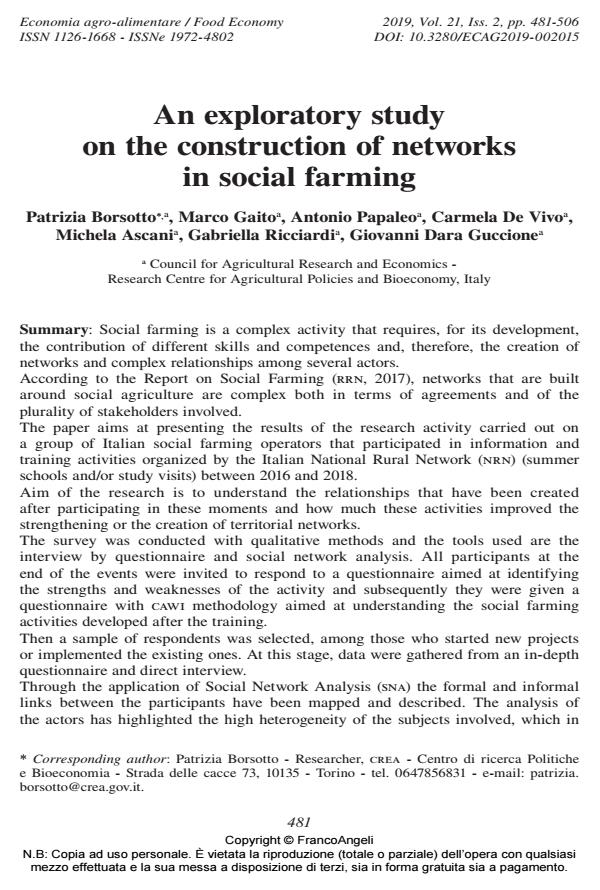 Social farming is a complex activity that requires, for its development, the contribution of different skills and competences and, therefore, the creation of networks and complex relationships among several actors. According to the Report on Social Farming (rrn, 2017), networks that are built around social agriculture are complex both in terms of agreements and of the plurality of stakeholders involved. The paper aims at presenting the results of the research activity carried out on a group of Italian social farming operators that participated in information and training activities organized by the Italian National Rural Network (nrn) (summer schools and/or study visits) between 2016 and 2018. Aim of the research is to understand the relationships that have been created after participating in these moments and how much these activities improved the strengthening or the creation of territorial networks. The survey was conducted with qualitative methods and the tools used are the interview by questionnaire and social network analysis. All participants at the end of the events were invited to respond to a questionnaire aimed at identifying the strengths and weaknesses of the activity and subsequently they were given a questionnaire with cawi methodology aimed at understanding the social farming activities developed after the training. Then a sample of respondents was selected, among those who started new projects or implemented the existing ones. At this stage, data were gathered from an in-depth questionnaire and direct interview. Through the application of Social Network Analysis (sna) the formal and informal links between the participants have been mapped and described. The analysis of the actors has highlighted the high heterogeneity of the subjects involved, which in most cases is constituted by farmers. The network is not very cohesive due to the lack of links between many actors. However, it is an active and inclusive network characterized by redundant links that may be poorly efficient and an obstacle to its further expansion. Within the network, there are actors who simultaneously hold multiple roles representing multiple interests; the nrn no longer appears as a standalone unit that only performs an "institutional function" but as a social subject.