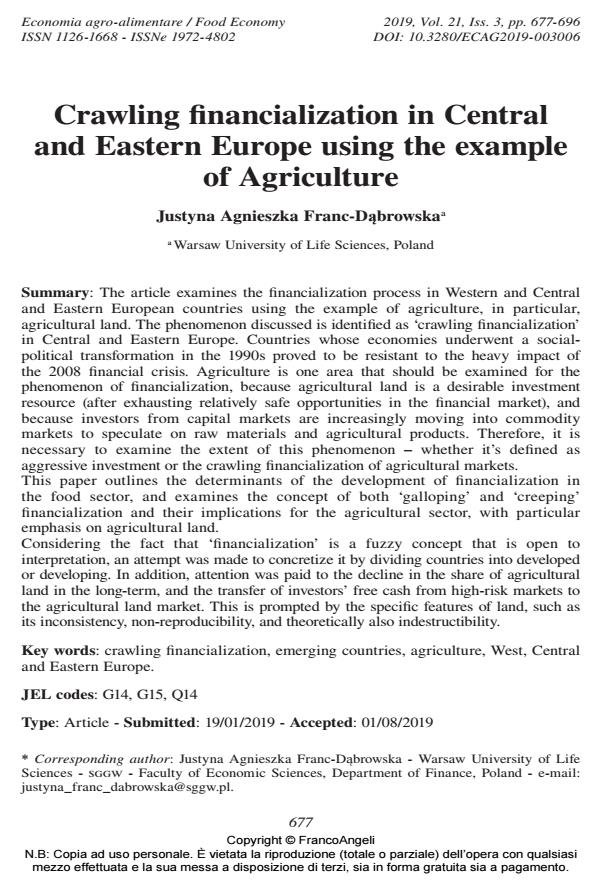 The article examines the financialization process in Western and Central and Eastern European countries using the example of agriculture, in particular, agricultural land. The phenomenon discussed is identified as ‘crawling financialization’ in Central and Eastern Europe. Countries whose economies underwent a socialpolitical transformation in the 1990s proved to be resistant to the heavy impact of the 2008 financial crisis. Agriculture is one area that should be examined for the phenomenon of financialization, because agricultural land is a desirable investment resource (after exhausting relatively safe opportunities in the financial market), and because investors from capital markets are increasingly moving into commodity markets to speculate on raw materials and agricultural products. Therefore, it is necessary to examine the extent of this phenomenon - whether it’s defined as aggressive investment or the crawling financialization of agricultural markets. This paper outlines the determinants of the development of financialization in the food sector, and examines the concept of both ‘galloping’ and ‘creeping’ financialization and their implications for the agricultural sector, with particular emphasis on agricultural land. Considering the fact that ‘financialization’ is a fuzzy concept that is open to interpretation, an attempt was made to concretize it by dividing countries into developed or developing. In addition, attention was paid to the decline in the share of agricultural land in the long-term, and the transfer of investors’ free cash from high-risk markets to the agricultural land market. This is prompted by the specific features of land, such as its inconsistency, non-reproducibility, and theoretically also indestructibility.