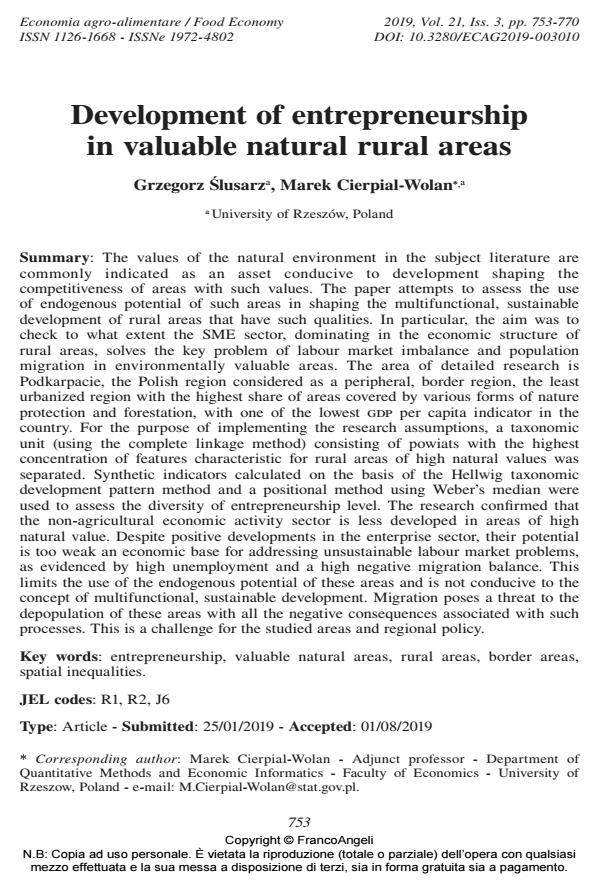 The values of the natural environment in the subject literature are commonly indicated as an asset conducive to development shaping the competitiveness of areas with such values. The paper attempts to assess the use of endogenous potential of such areas in shaping the multifunctional, sustainable development of rural areas that have such qualities. In particular, the aim was to check to what extent the sme sector, dominating in the economic structure of rural areas, solves the key problem of labour market imbalance and population migration in environmentally valuable areas. The area of detailed research is Podkarpacie, the Polish region considered as a peripheral, border region, the least urbanized region with the highest share of areas covered by various forms of nature protection and forestation, with one of the lowest gdp per capita indicator in the country. For the purpose of implementing the research assumptions, a taxonomic unit (using the complete linkage method) consisting of powiats with the highest concentration of features characteristic for rural areas of high natural values was separated. Synthetic indicators calculated on the basis of the Hellwig taxonomic development pattern method and a positional method using Weber’s median were used to assess the diversity of entrepreneurship level. The research confirmed that the non-agricultural economic activity sector is less developed in areas of high natural value. Despite positive developments in the enterprise sector, their potential is too weak an economic base for addressing unsustainable labour market problems, as evidenced by high unemployment and a high negative migration balance. This limits the use of the endogenous potential of these areas and is not conducive to the concept of multifunctional, sustainable development. Migration poses a threat to the depopulation of these areas with all the negative consequences associated with such processes. This is a challenge for the studied areas and regional policy.