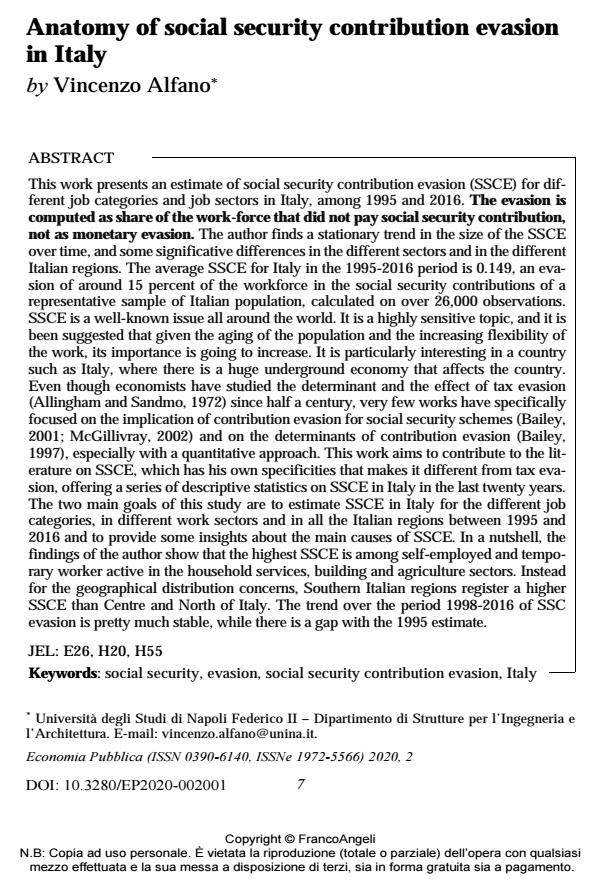 This work presents an estimate of social security contribution evasion (SSCE) for different job categories and job sectors in Italy, among 1995 and 2016. The evasion is computed as share of the work-force that did not pay social security contribution, not as monetary evasion. The author finds a stationary trend in the size of the SSCE over time, and some significative differences in the different sectors and in the different Italian regions. The average SSCE for Italy in the 1995-2016 period is 0.149, an evasion of around 15 percent of the workforce in the social security contributions of a representative sample of Italian population, calculated on over 26,000 observations. SSCE is a well-known issue all around the world. It is a highly sensitive topic, and it is been suggested that given the aging of the population and the increasing flexibility of the work, its importance is going to increase. It is particularly interesting in a country such as Italy, where there is a huge underground economy that affects the country. Even though economists have studied the determinant and the effect of tax evasion (Allingham and Sandmo, 1972) since half a century, very few works have specifically focused on the implication of contribution evasion for social security schemes (Bailey, 2001; McGillivray, 2002) and on the determinants of contribution evasion (Bailey, 1997), especially with a quantitative approach. This work aims to contribute to the literature on SSCE, which has his own specificities that makes it different from tax evasion, offering a series of descriptive statistics on SSCE in Italy in the last twenty years. The two main goals of this study are to estimate SSCE in Italy for the different job categories, in different work sectors and in all the Italian regions between 1995 and 2016 and to provide some insights about the main causes of SSCE. In a nutshell, the findings of the author show that the highest SSCE is among self-employed and temporary worker active in the household services, building and agriculture sectors. Instead for the geographical distribution concerns, Southern Italian regions register a higher SSCE than Centre and North of Italy. The trend over the period 1998-2016 of SSC evasion is pretty much stable, while there is a gap with the 1995 estimate.