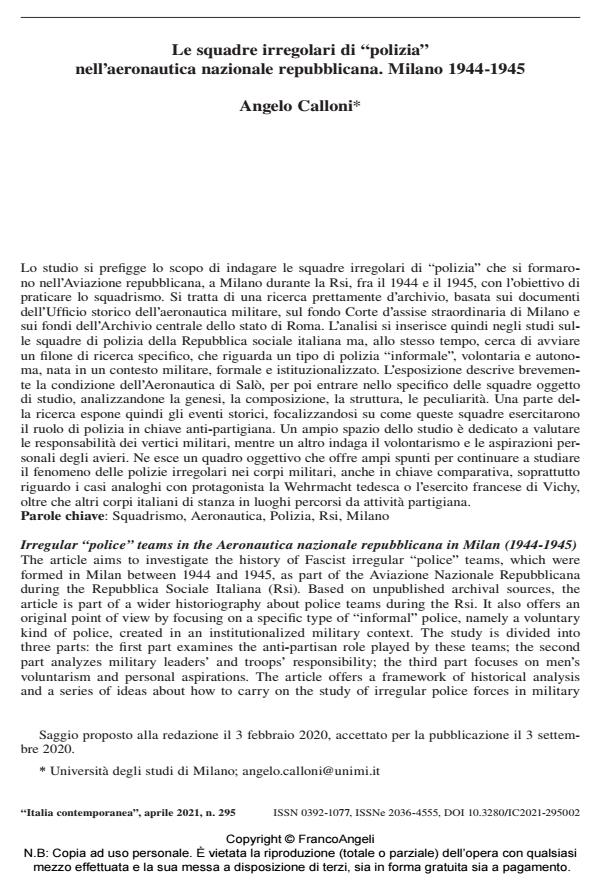 The article aims to investigate the history of Fascist irregular "police" teams, which were formed in Milan between 1944 and 1945, as part of the Aviazione Nazionale Repubblicana during the Repubblica Sociale Italiana (Rsi). Based on unpublished archival sources, the article is part of a wider historiography about police teams during the Rsi. It also offers an original point of view by focusing on a specific type of “informal” police, namely a voluntary kind of police, created in an institutionalized military context. The study is divided into three parts: the first part examines the anti-partisan role played by these teams; the second part analyzes military leaders’ and troops’ responsibility; the third part focuses on men’s voluntarism and personal aspirations. The article offers a framework of historical analysis and a series of ideas about how to carry on the study of irregular police forces in military corps. It also provides some insights from a comparative perspective, especially with regard to similar cases involving the German Wehrmacht or the French army of Vichy, as well as other Italian military divisions stationed in places covered by partisan activity.