Consumption and consumers of food products in the postmodern society 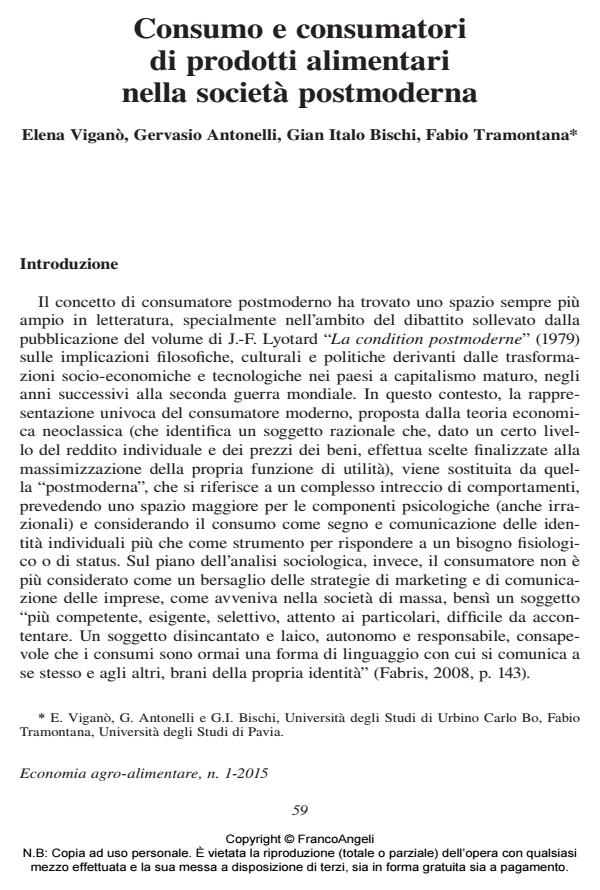 The concept of the ‘postmodern consumer’ plays a central role in the debate, started in the early 80s, about economic, social and cultural changes in developed countries in the years following the end of the second world war. These changes were interpreted as a passage from modern to postmodern society. According to this literature, postmodern conditions have had a significant impact on the consumer, especially with regard to his/her psychological characteristics. In this new framework the consumer is viewed as someone more interested in the symbolic or cultural value of products and services than in their functional and utility value. At the same time, he/she is represented as an active player in the market scenario, exercising the freedom to move in search of trademarks, symbols and experiences through which he/she can communicate his/her own identity. The figure of the postmodern consumer is difficult to place in the framework of standard neoclassical theories on consumerism, which highlights the shortcomings of this theoretical approach in studying the behavior of the postmodern consumer. These shortcomings are likely to be more relevant when considering the consumer of food products, given the strong nexus between consumption and the well-being of the consumer and the symbolic and cultural value that food products project. The main goal of the paper is to provide an interdisciplinary overview of the postmodern consumer of food products by means of an analysis of scientific literature, mainly in the areas of behavioral economics, sociology and psychology. Following this, the paper focuses on questions regarding information and the rational behavior of consumers as being the main hypothesis upon which standard neoclassical theories are based, adding to the traditional approach to consumer choice the new insights provided by this different perspective. Finally, the implications of this type of analysis for food safety and quality policies are considered, together with a discussion on further research needed to define more effective policies.