Tommaso Padoa-Schioppa: Macroeconomic and Monetary Thought, and Policy-making at the European Commission 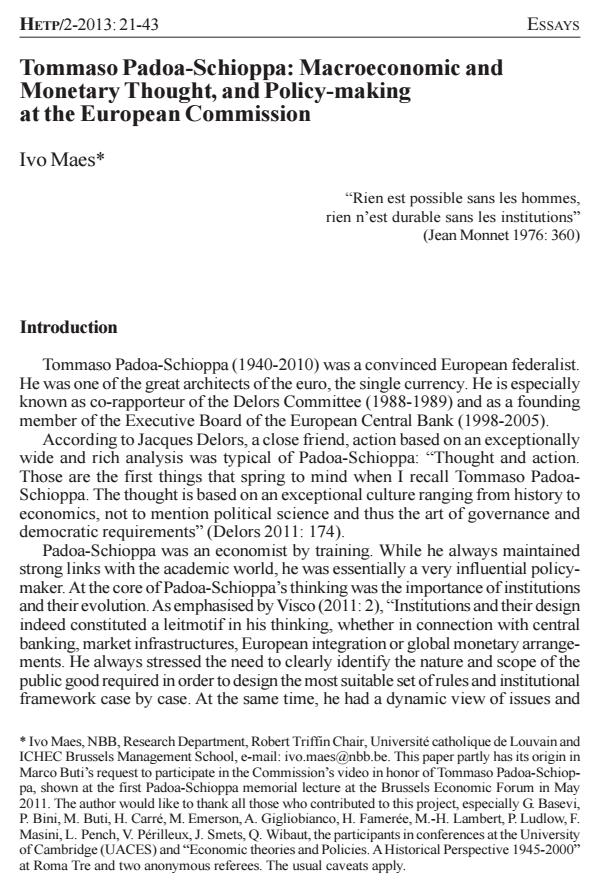 Tommaso Padoa-Schioppa was one of the great architects of the euro. He is remembered in particular as co-rapporteur for the Delors Committee and as a founding member of the European Central Bank’s Executive Board. For Padoa-Schioppa, becoming Director-General of the European Commission’s DG II (from 1979 to 1983), was a defining moment in his career and life. This period is the main focus of this paper. At the Commission, Padoa- Schioppa’s main priority was the European Monetary System, which was launched in March 1979. He was closely involved in several projects to strengthen the EMS, to improve economic policy convergence and develop the position of the ECU. The other main objective for Padoa-Schioppa was the strengthening of DG II’s analytical capacity, especially its model-building capacity and its links with the academic world. As such, he played a crucial role in the professionalization of economics at the Commission and in preparing DG II for the important role it would play in the EMU process. This also shows that, for assessing the legacy of an economist, it is not only important to look at his own writings and contributions, but also how he shapes the institutions in which he participates.