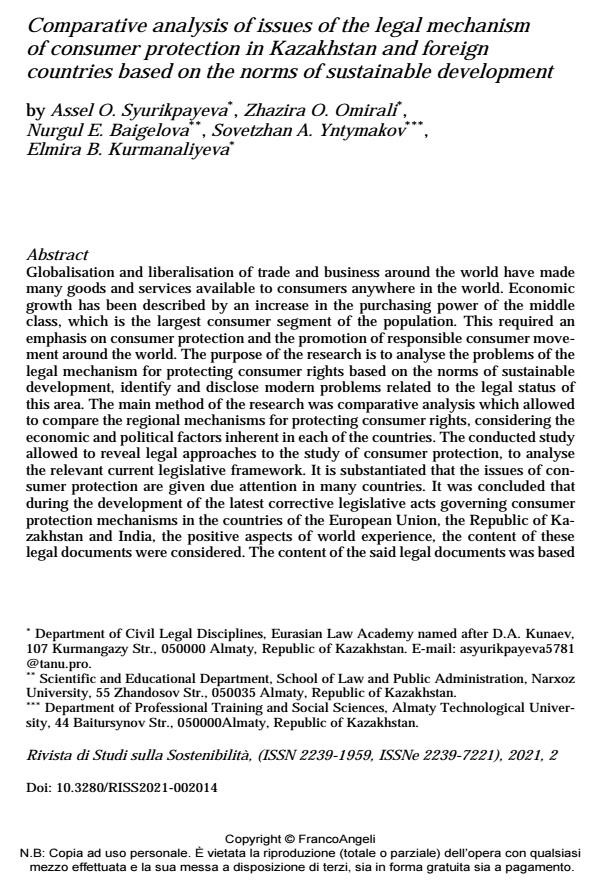 Globalisation and liberalisation of trade and business around the world have made many goods and services available to consumers anywhere in the world. Econom-ic growth has been described by an increase in the purchasing power of the middle class, which is the largest consumer segment of the population. This required an emphasis on consumer protection and the promotion of responsible consumer movement around the world. The purpose of the research is to analyse the prob-lems of the legal mechanism for protecting consumer rights based on the norms of sustainable development, identify and disclose modern problems related to the le-gal status of this area. The main method of the research was comparative analysis which allowed to compare the regional mechanisms for protecting consumer rights, considering the economic and political factors inherent in each of the countries. The conducted study allowed to reveal legal approaches to the study of consumer protection, to analyse the relevant current legislative framework. It is substantiated that the issues of consumer protection are given due attention in many countries. It was concluded that during the development of the latest corrective legislative acts governing consumer protection mechanisms in the countries of the European Union, the Republic of Kazakhstan and India, the positive aspects of world experience, the content of these legal documents were considered. The content of the said legal documents was based on the UN principles of consumer protection, which indicates a significant contribution of the above countries to the perfor-mance of the obligations to guarantee the consumers their fundamental rights.