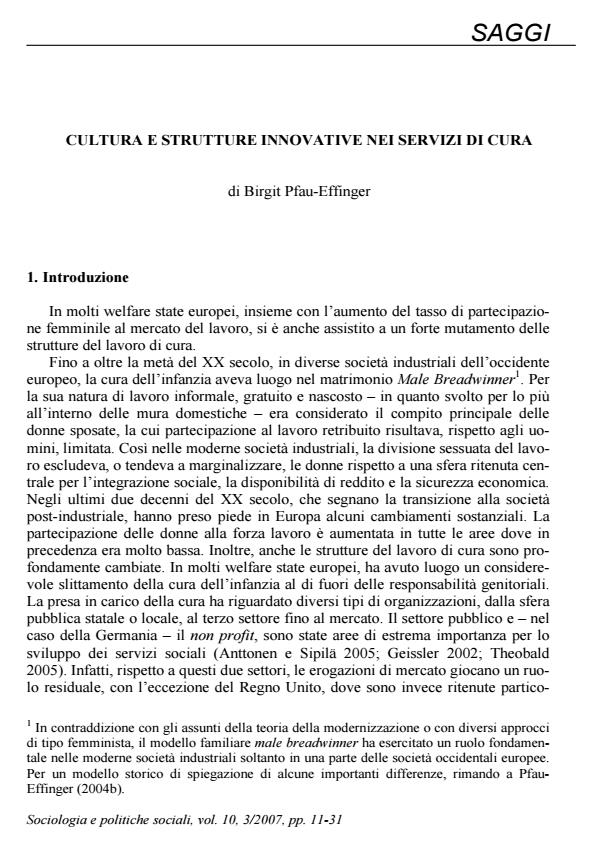 The first part of this article briefly outlines the ways in which childcare is organised in European societies. In the second part, an explanatory framework for cross-national differences will be introduced, namely the theoretical approach of the arrangement of work and family. This approach emphasizes the mutual, and in part contradictory, interrelations and dynamics between culture, institutions, social structures and action, which form the societal context for the structures of care work in a society. In the third part, it will be outlined how the differences in the cultural context and welfare state policies in different European societies and the ways in which these interact make a particular contribution to explaining differences in the degree to which childcare is organised in society and in the gender division of labour within the family. There are clearly cross-national differences in European societies in relation to the ways in which care work is organised. In this article, a theoretical framework for the explanation of such differences was introduced. It is based on the assumption that the specific ways in which cultural, institutional, and socio-economic factors interact in the specific ‘arrangement of work and family’ in a society are crucial for the explanation of cross-national differences. The example of the patterns of the organisation of childcare in European societies was used as an example. It was shown how particularly the ways in which welfare state policies on the one hand and cultural models of the family on the other interact can contribute to explaining the differences between these patterns. It was also addressed how far this explanatory framework is adequate for the explanation of international differences in housework. It was emphasized that additional sets of cultural values should be taken into account here, like the degree to which a tradition of a ‘servant culture’ exists as well as the degree to which specific household tasks are defined as ‘female’ or ‘male’ and the extent to which change is on the way.;