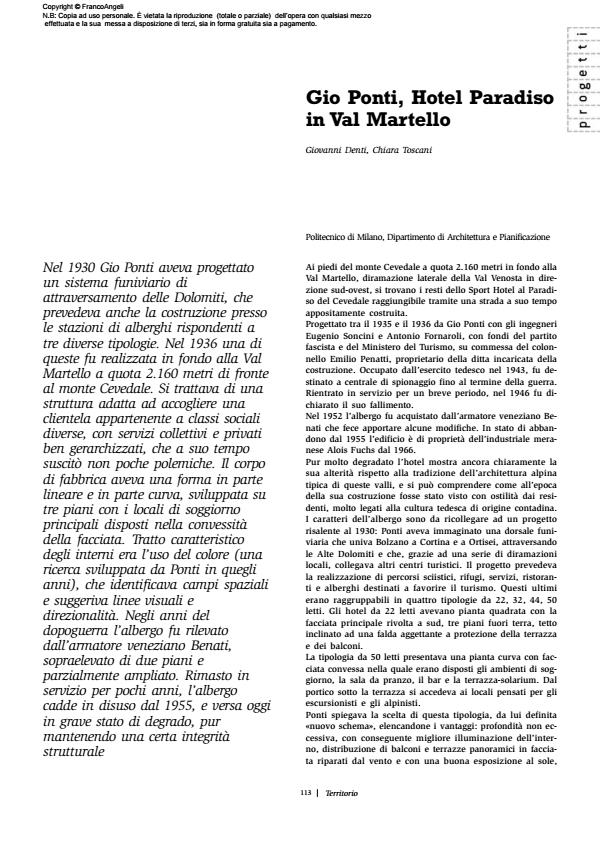 <em>Gio Ponti, Hotel Paradiso in Val Martello</em> - In 1930 Gio Ponti designed a cable car system to cross the Dolomites, which also involved the construction of hotels of three different types at the stations. One of these was built in 1936 at the bottom of the Val Martello valley at an altitude of 2,160 metres in front of Mount Cevedale. It was a facility designed to take customers belonging to different social classes with a careful hierarchy of communal and private services which gave rise to much criticism and debate at the time. The body of the building was partly linear and partly curved in shape, rising to three storeys with the main rooms located in the convex curve of the front. One distinctive feature of the interiors was the use of colour (Ponti developed his study of this in that period), which identified spatial fields and suggested visual lines and directions. In the years after the war the hotel was purchased by a Venetian shipowner Benati, who added two floors and partially enlarged it. It operated for a few years and has been closed down since 1955. Today it is in a serious state of disrepair, although the structure is still standing.