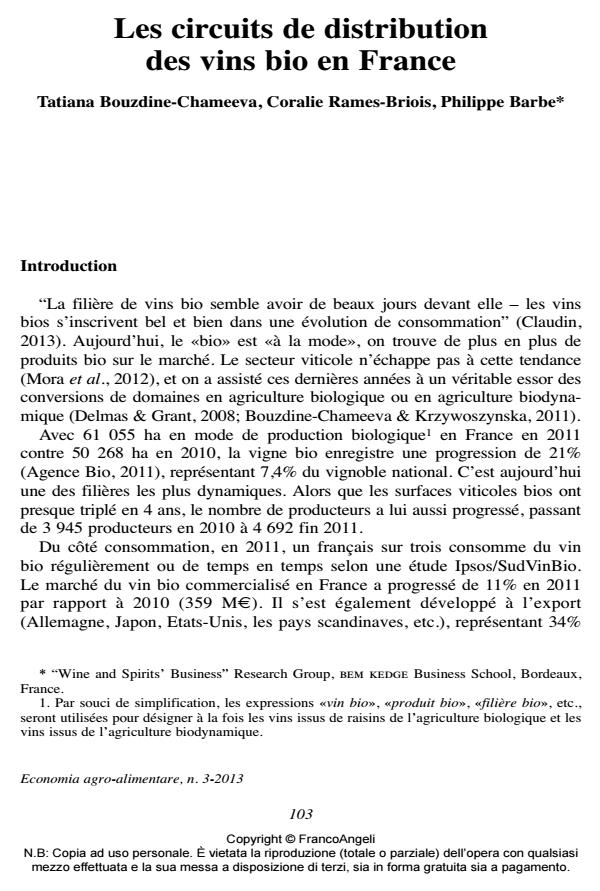 Since 2006 the conversion of vineyards to organic or biodynamic vineyards has been accelerating in France, and the annual rate of conversion varies between 20- 25% per year, attaining the total surface of 61.055 ha of bio vineyards in 2011. This growth is even more striking in the light of the shrinking total surface of vineyards and the decreasing trend of wine consumption in France. In this challenging context, we attempt to analyze which of the classic wine distribution channels are conducive to French bio wine producers. The study is grounded in a series of interviews in several regions of France on a variety of distribution practices employed by natural wine producers. The research methodology employs content analysis and cognitive mapping technique. While the bio wine distribution system appears to be diversified and mobilizes all the classic channels, direct sales and export appear to be of particular relevance. Our findings confirm the impact of extra production costs (from 15 to 30%) on the choice of an appropriate channel. This extra production cost, explained mainly by higher labor costs and partly justified by the higher quality of wines, typically results in higher prices which the final consumer must pay. In this case direct sales could be seen the most remunerative as a producer’s margins are not squeezed in intermediate transactions. A closer relation between a producer and a consumer also adds value to the product: consumers perceive bio wine primarily as a wine, a cultural product which witnesses the diversity of terroirs. The presented analysis of bio wines distribution channels will allow practitioners to better adjust their distribution strategies.