The accountant as a nobody 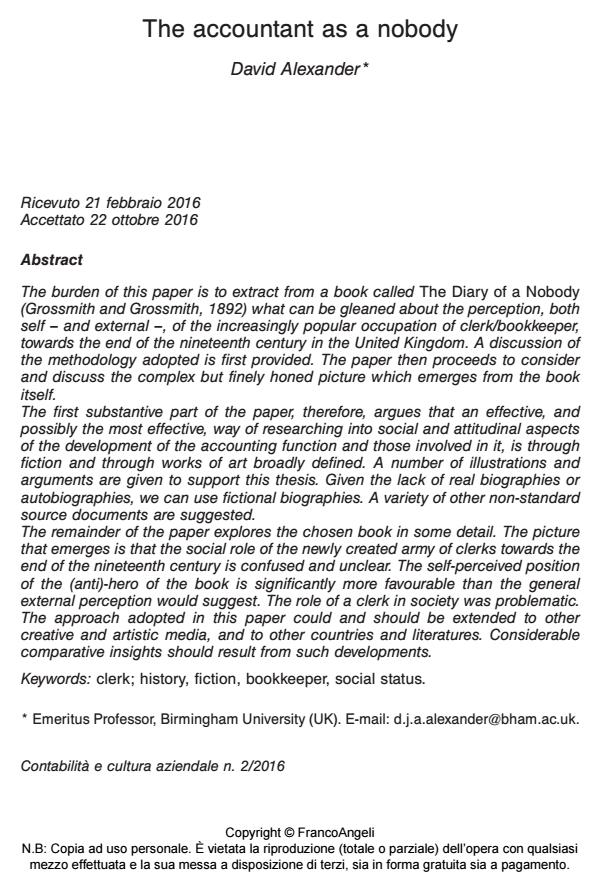 The burden of this paper is to extract from a book called The Diary of a Nobody (Grossmith and Grossmith, 1892) what can be gleaned about the perception, both self - and external -, of the increasingly popular occupation of clerk/bookkeeper, towards the end of the nineteenth century in the United Kingdom. A discussion of the methodology adopted is first provided. The paper then proceeds to consider and discuss the complex but finely honed picture which emerges from the book itself. The first substantive part of the paper, therefore, argues that an effective, and possibly the most effective, way of researching into social and attitudinal aspects of the development of the accounting function and those involved in it, is through fiction and through works of art broadly defined. A number of illustrations and arguments are given to support this thesis. Given the lack of real biographies or autobiographies, we can use fictional biographies. A variety of other non-standard source documents are suggested. The remainder of the paper explores the chosen book in some detail. The picture that emerges is that the social role of the newly created army of clerks towards the end of the nineteenth century is confused and unclear. The self-perceived position of the (anti)-hero of the book is significantly more favourable than the general external perception would suggest. The role of a clerk in society was problematic. The approach adopted in this paper could and should be extended to other creative and artistic media, and to other countries and literatures. Considerable comparative insights should result from such developments.