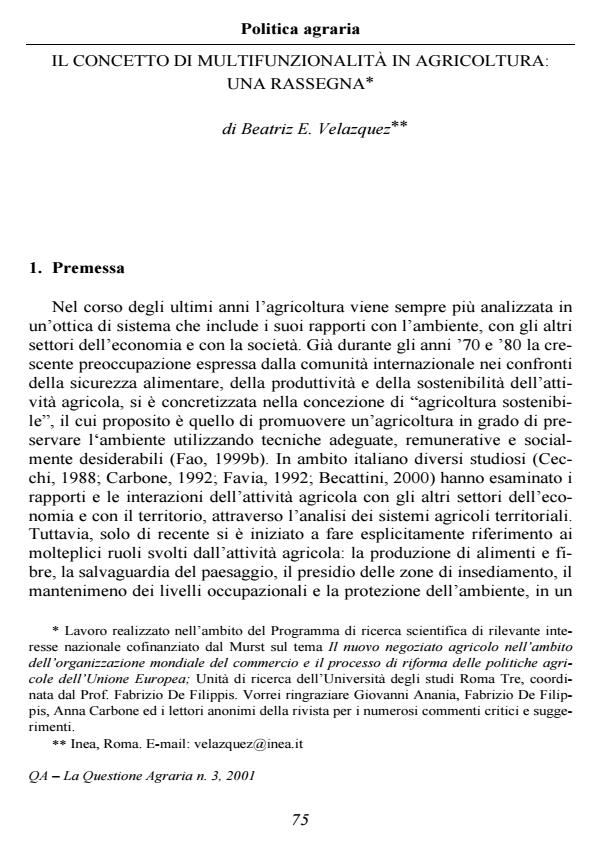 The Concept of Multifunctionality in Agriculture: A Survey - The concept of multifunctionality is not completely new, but it assumes practical relevance in response to the growing interest demonstrated by taxpayers and consumers on the several outputs of agriculture: environmental services, landscape, leisure space and tourism services. In fact, most of the related literature associates the concept of multifunctionality to the agriculture capacity to produce a net positive effect in terms of public goods, so multifunctionality is often used as a new excuse for supporting the agriculture sector. The aim of the article is to review the current debate on multifunctionality. The primary focus comes on the most important theoretical aspects of multifunctionality, particularly the economic characteristics of some agriculture outputs and the production relationship both with food production and among outputs. A second paragraph is advocated to examine the most relevant implications of applying the concept in the design of agriculture policies, comparing the different typologies of instruments proposed by the countries involved in the debate. Specifically, the comparison is based on the positions assumed by countries in the current Wto negotiations, where the main argument is the opportunity to apply trade distorting instruments, thus not included in the "green box", in order to foster the multiple functions associated with agriculture. Thus the approaches to multifunctionality proposed by Fao and Ocse are examined, together with the definitions produced by European Union, Japan and Norway. A point emerging forcefully is the strong dishomogeneity that prevails in the approaches to multifunctionality, regarding both the importance given to each of the many functions of agriculture and the typologies of instruments proposed to foster those functions.