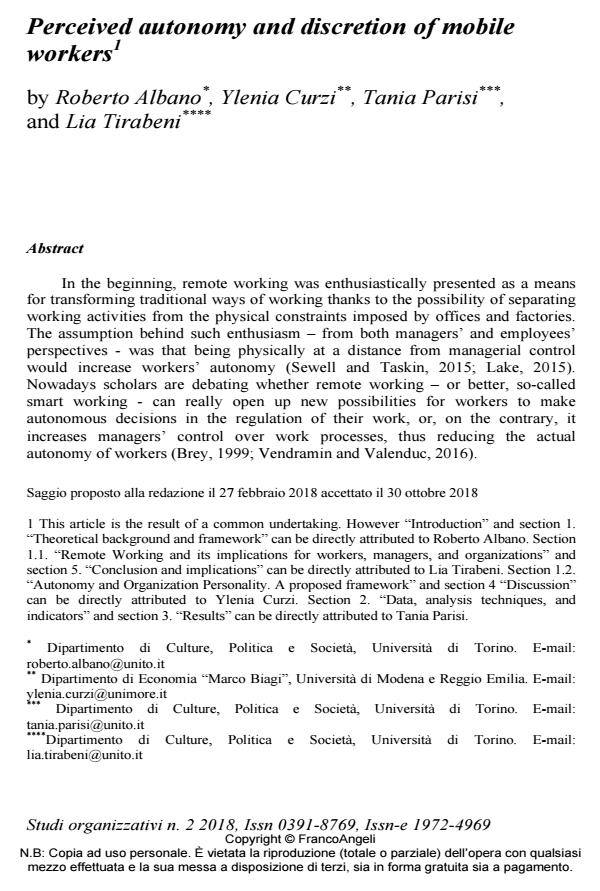 In the beginning, remote working was enthusiastically presented as a means for transforming traditional ways of working thanks to the possibility of separating working activities from the physical constraints imposed by offices and factories. The assumption behind such enthusiasm - from both managers’ and employees’ perspectives - was that being physically at a distance from managerial control would increase workers’ autonomy (Sewell and Taskin, 2015; Lake, 2015). Nowadays scholars are debating whether remote working - or better, so-called smart working - can really open up new possibilities for workers to make autonomous decisions in the regulation of their work, or, on the contrary, it increases managers’ control over work processes, thus reducing the actual autonomy of workers (Brey, 1999; Vendramin and Valenduc, 2016). The present paper proposes to examine the question starting from the analytical distinction between autonomy and discretion (Maggi, 2003/2016). Particularly, based on a recently proposed theoretical framework (Albano et al., 2018), we consider these two concepts as dichotomous dimensions that can be combined in order to identify four types of "organization personality" (Barnard, 1938) - that is, four prevailing ways in which the individual can contribute to the organizational process: other-directed, discretionary, relatively autonomous, and mainly autonomous. Finally, we performed a factor analysis of some variables drawn from the sixth wave (2015) of the European Working Conditions Survey in a subsample of four industrialized countries (Germany, France, Italy, and the United Kingdom) characterized by robust digitalization of industrial production, to measure the consistency of the four types of organization personality in two groups of respondents: mobile workers (a proxy group of smart workers) and other categories of workers (traditional). The results show that in our sample the perception of relative autonomy is more widespread among mobile workers than in other categories of workers. Smart working seems to be a way for achieving ‘dependable role performance’ (Katz and Kahn, 1966) in complex work processes without foregoing innovative and autonomous behaviours.