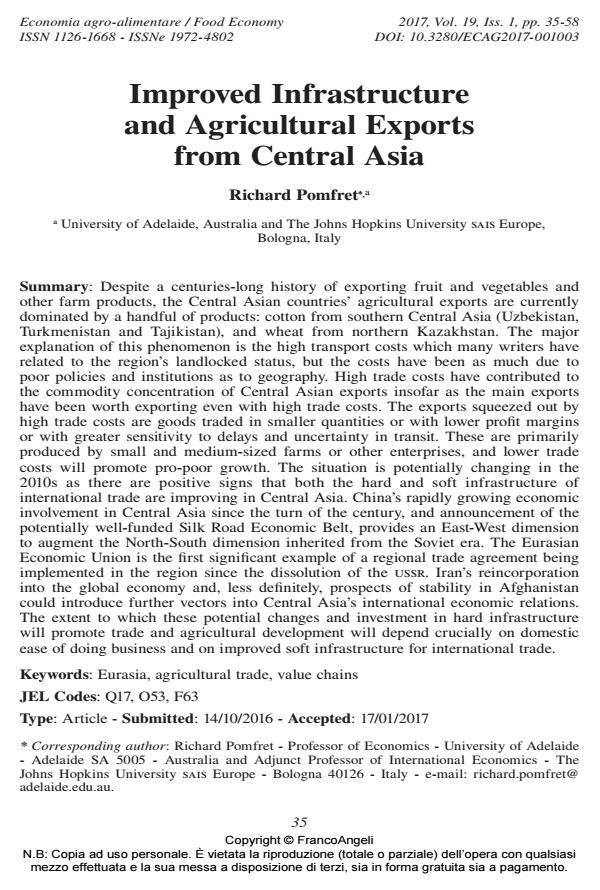 Despite a centuries-long history of exporting fruit and vegetables and other farm products, the Central Asian countries’ agricultural exports are currently dominated by a handful of products: cotton from southern Central Asia (Uzbekistan, Turkmenistan and Tajikistan), and wheat from northern Kazakhstan. The major explanation of this phenomenon is the high transport costs which many writers have related to the region’s landlocked status, but the costs have been as much due to poor policies and institutions as to geography. High trade costs have contributed to the commodity concentration of Central Asian exports insofar as the main exports have been worth exporting even with high trade costs. The exports squeezed out by high trade costs are goods traded in smaller quantities or with lower profit margins or with greater sensitivity to delays and uncertainty in transit. These are primarily produced by small and medium-sized farms or other enterprises, and lower trade costs will promote pro-poor growth. The situation is potentially changing in the 2010s as there are positive signs that both the hard and soft infrastructure of international trade are improving in Central Asia. China’s rapidly growing economic involvement in Central Asia since the turn of the century, and announcement of the potentially well-funded Silk Road Economic Belt, provides an East-West dimension to augment the North-South dimension inherited from the Soviet era. The Eurasian Economic Union is the first significant example of a regional trade agreement being implemented in the region since the dissolution of the ussr. Iran’s reincorporation into the global economy and, less definitely, prospects of stability in Afghanistan could introduce further vectors into Central Asia’s international economic relations. The extent to which these potential changes and investment in hard infrastructure will promote trade and agricultural development will depend crucially on domestic ease of doing business and on improved soft infrastructure for international trade.