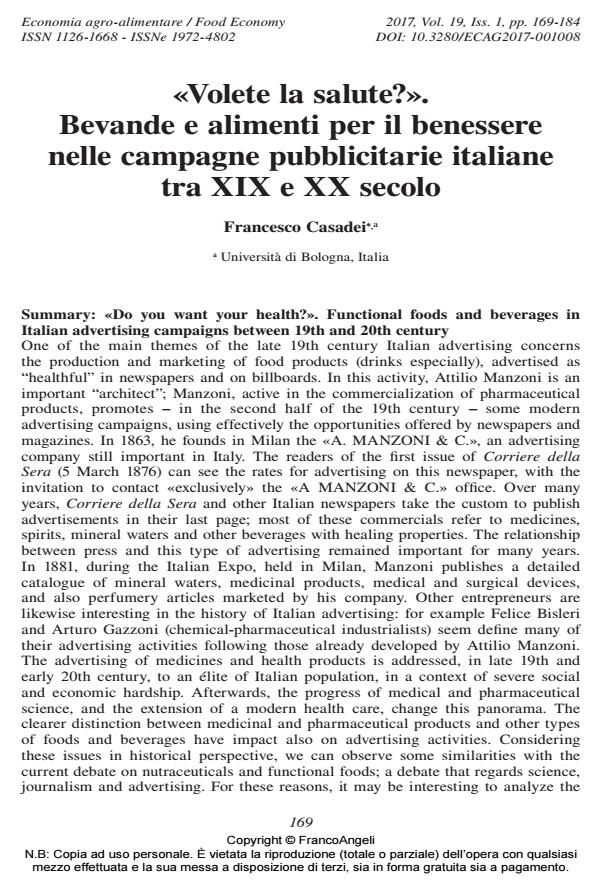 One of the main themes of the late 19th century Italian advertising concerns the production and marketing of food products (drinks especially), advertised as "healthful" in newspapers and on billboards. In this activity, Attilio Manzoni is an important "architect"; Manzoni, active in the commercialization of pharmaceutical products, promotes - in the second half of the 19th century - some modern advertising campaigns, using effectively the opportunities offered by newspapers and magazines. In 1863, he founds in Milan the «A. MANZONI & C.», an advertising company still important in Italy. The readers of the first issue of Corriere della Sera (5 March 1876) can see the rates for advertising on this newspaper, with the invitation to contact «exclusively» the «A MANZONI & C.» office. Over many years, Corriere della Sera and other Italian newspapers take the custom to publish advertisements in their last page; most of these commercials refer to medicines, spirits, mineral waters and other beverages with healing properties. The relationship between press and this type of advertising remained important for many years. In 1881, during the Italian Expo, held in Milan, Manzoni publishes a detailed catalogue of mineral waters, medicinal products, medical and surgical devices, and also perfumery articles marketed by his company. Other entrepreneurs are likewise interesting in the history of Italian advertising: for example Felice Bisleri and Arturo Gazzoni (chemical-pharmaceutical industrialists) seem define many of their advertising activities following those already developed by Attilio Manzoni. The advertising of medicines and health products is addressed, in late 19th and early 20th century, to an élite of Italian population, in a context of severe social and economic hardship. Afterwards, the progress of medical and pharmaceutical science, and the extension of a modern health care, change this panorama. The clearer distinction between medicinal and pharmaceutical products and other types of foods and beverages have impact also on advertising activities. Considering these issues in historical perspective, we can observe some similarities with the current debate on nutraceuticals and functional foods; a debate that regards science, journalism and advertising. For these reasons, it may be interesting to analyze the historical context and the bioghaphies of some Italian "pioneers" of advertising and marketing.;