The influence of gender social identity on empathy and emotional intelligence: proposal for the training of counselors in the light of result of a research 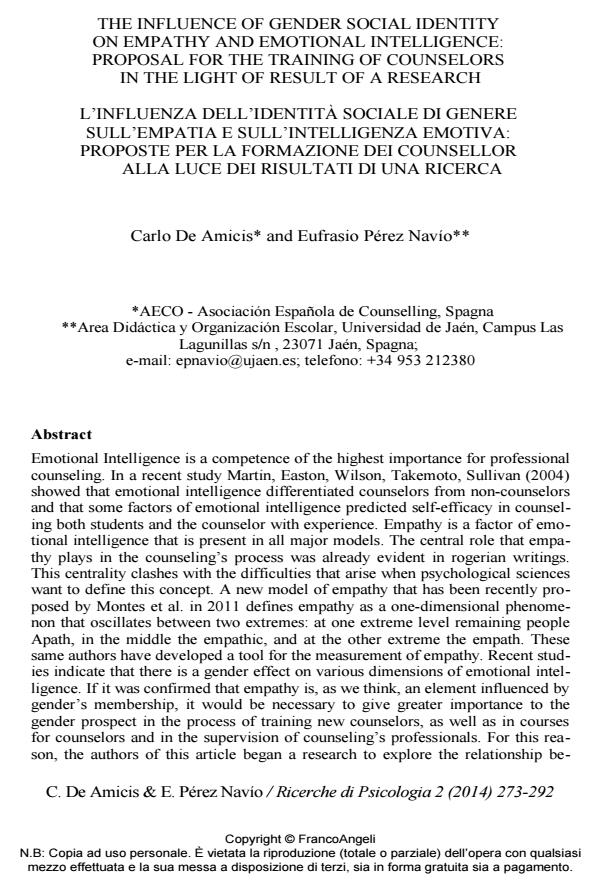 Emotional Intelligence is a competence of the highest importance for professional counseling. In a recent study Martin, Easton, Wilson, Takemoto, Sullivan (2004) showed that emotional intelligence differentiated counselors from non-counselors and that some factors of emotional intelligence predicted self-efficacy in counseling both students and the counselor with experience. Empathy is a factor of emotional intelligence that is present in all major models. The central role that empathy plays in the counseling’s process was already evident in rogerian writings. This centrality clashes with the difficulties that arise when psychological sciences want to define this concept. A new model of empathy that has been recently proposed by Montes et al. in 2011 defines empathy as a one-dimensional phenomenon that oscillates between two extremes: at one extreme level remaining people Apath, in the middle the empathic, and at the other extreme the empath. These same authors have developed a tool for the measurement of empathy. Recent studies indicate that there is a gender effect on various dimensions of emotional intelligence. If it was confirmed that empathy is, as we think, an element influenced by gender’s membership, it would be necessary to give greater importance to the gender prospect in the process of training new counselors, as well as in courses for counselors and in the supervision of counseling’s professionals. For this reason, the authors of this article began a research to explore the relationship btween gender belonging, gender role, empathy and emotional intelligence. The subjects were 66 university students of the Degree Course in Teaching of the University of Jaen. The results so far obtained, indicate a clear influence of the gender factor on emotional intelligence in general and on empathy in particular.

Carlo De Amicis, Navìo Eufrasio Pérez, The influence of gender social identity on empathy and emotional intelligence: proposal for the training of counselors in the light of result of a research in "RICERCHE DI PSICOLOGIA " 2/2014, pp 273-292, DOI: 10.3280/RIP2014-002003