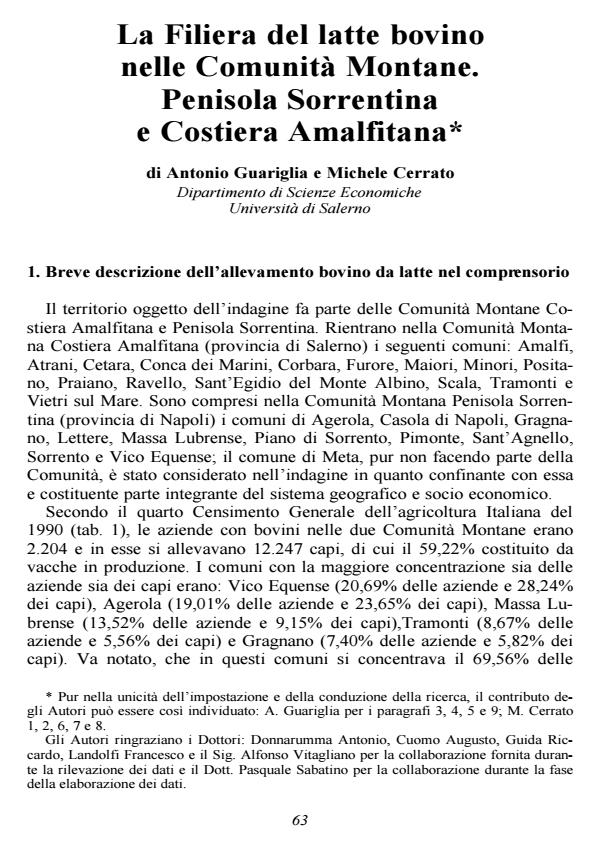 In the examined territorial area has emerged that: a) the breeding farms milk cows are in sharp contraction because of increasing production cost and a reduced bargaining of the farmers; b) the manufacture is modest and fragmented. For the survival of the local sector of milk production and transformation it s necessary to adopt a strategy of valorization of the local products recognised as traditional by MIRAF (July, 2000) such as "provolone del monaco" and "caciottina canestrata" made in Sorrento. An important chance for increasing the breeding farms milk cows has been recognised by a recent decision of the Campania Region that assigns the additional quotas of milk according to some criteria which, among other things, establishes that in the Comunità Montana the maximum number of requests made by the breeders of the Amalfitana and Sorrentina Coast, can reach up to 90 quintals of milk production per h. of SAU. This limit is higher than the one prevailing in other territorial areas where the milk production is diffused (30 q). In the examined local area there is a narrow production of traditional cheeses. Because of the small production they are not very re-known outside the area of production and few neighbourhoods. Nevertheless, they exhibit excellent qualitative standard, thanks to the cleverness of the casari inspired by an old tradition and because of this they deserve much longer diffusion. Even if the local milk has suffered a drastic reduction, it is common opinion that also a limited addition of its quantity is essential for the typical microflora involved and it is the base of the quality of the manufactured products. This is the reason why all the local sectors of Lattari Muntains tied up to the production of the milk, they should be safeguarded and supported, especially in a tourist zone where products for the delicate taste, nourishing capability and lightness can, together with the environmental protection, represent a strong incentive to attract new flows of visitors. It is not by chance that the two Comunità Montane (The Amalfitana and Sorrentina Coast) have recently promoted "the road of the taste of the Lattari Montains". A thematic route that aims at the exploitation both of the environmental resource and the typical agricultural productions of the districts.