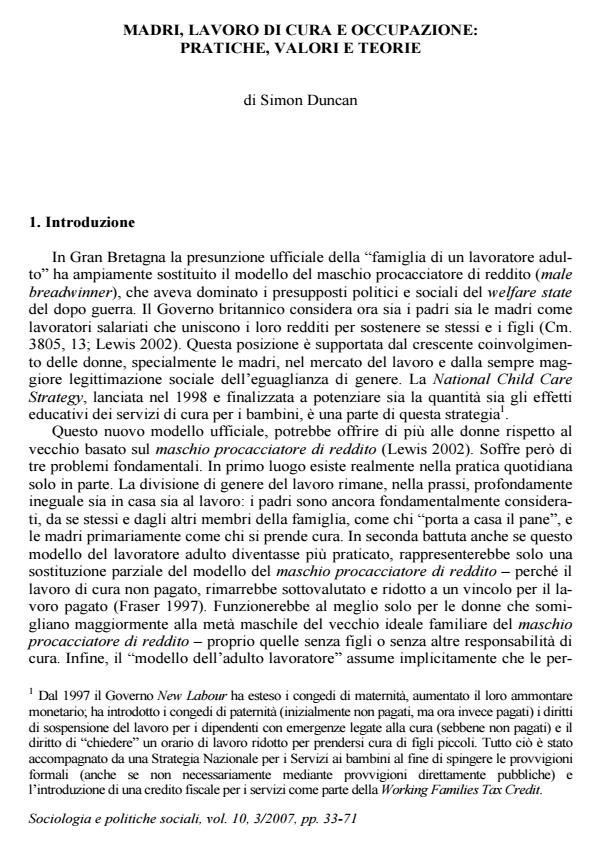 In Britain the official assumption of an adult worker family has largely replaced the male breadwinner model, which dominated both policy and social assumptions in the post-war welfare state. The British government now regards both fathers and mothers as workers in the labour market, who pool their earned income in supporting themselves and their children. This position is supported by reference to the increasing involvement of women, especially mothers, in the labour market and to the increasing social acceptance of gender equality. This new official model may have more to offer women than the old male breadwinner model. But it suffers from three major problems. First, the adult worker model does hardly exists in everyday practice. Second, even if this adult worker model did become widely practiced, it would only be a partial replacement for the male breadwinner model, because unpaid caring would remain undervalued and reduced to a constraint to paid work. Finally, the ‘adult worker model’ implicitly assumes that people act as a ‘rational economic man’ in taking individualistic, cost-benefit type decisions about how to maximise their own personal gain. As a result, policy makers and shapers then go on to commit what I have called the rationality mistake. Decisions are still made rationally, but with a different sort of rationality from that assumed by the adult worker model. In this article I explore this different rationality further. The empirical research results reported here, using intensive qualitative research on the processes through which mothers actually do make decisions about the relationship between mothering and paid work, division of labour with partners, and choosing child care, support this suggestion. It also concurs with recent extensive survey research. Mothers make morally and socially based decisions about what behaviour is right and proper, and these decisions can vary between different social groups in different places.;