Introduction of a Nationwide Minimum Wage: Challenges to Agribusinesses in Germany 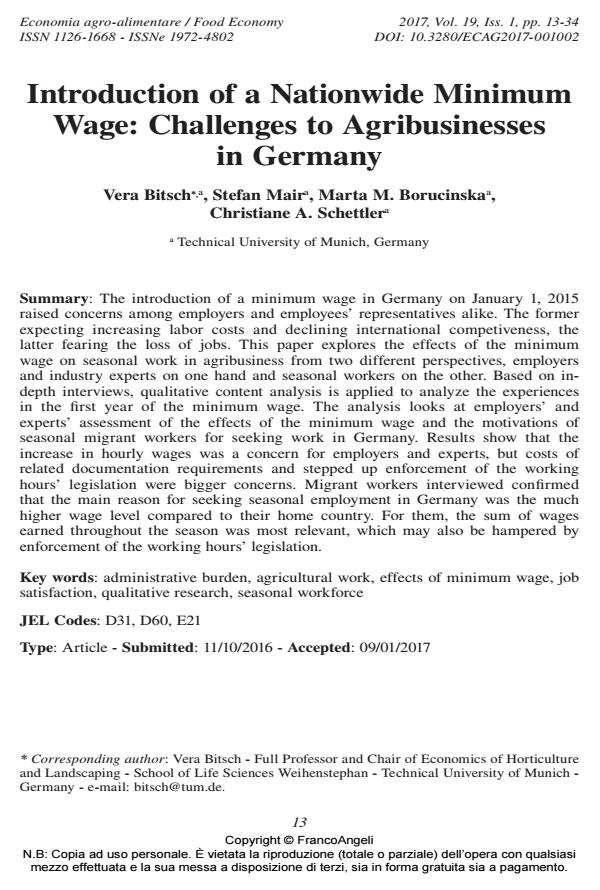 The introduction of a minimum wage in Germany on January 1, 2015 raised concerns among employers and employees’ representatives alike. The former expecting increasing labor costs and declining international competiveness, the latter fearing the loss of jobs. This paper explores the effects of the minimum wage on seasonal work in agribusiness from two different perspectives, employers and industry experts on one hand and seasonal workers on the other. Based on indepth interviews, qualitative content analysis is applied to analyze the experiences in the first year of the minimum wage. The analysis looks at employers’ and experts’ assessment of the effects of the minimum wage and the motivations of seasonal migrant workers for seeking work in Germany. Results show that the increase in hourly wages was a concern for employers and experts, but costs of related documentation requirements and stepped up enforcement of the working hours’ legislation were bigger concerns. Migrant workers interviewed confirmed that the main reason for seeking seasonal employment in Germany was the much higher wage level compared to their home country. For them, the sum of wages earned throughout the season was most relevant, which may also be hampered by enforcement of the working hours’ legislation.