European Wine Policies and their consequences on the global wine trade 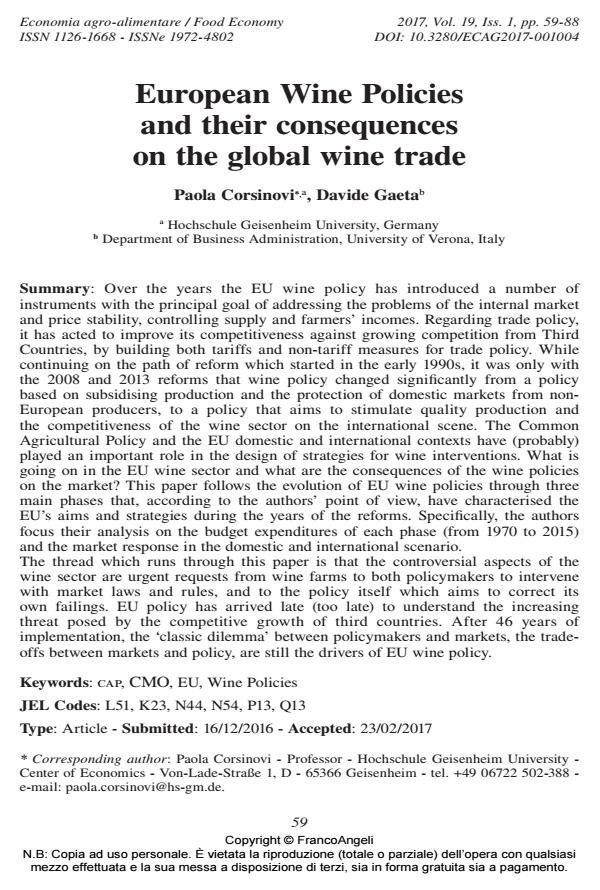 Over the years the EU wine policy has introduced a number of instruments with the principal goal of addressing the problems of the internal market and price stability, controlling supply and farmers’ incomes. Regarding trade policy, it has acted to improve its competitiveness against growing competition from Third Countries, by building both tariffs and non-tariff measures for trade policy. While continuing on the path of reform which started in the early 1990s, it was only with the 2008 and 2013 reforms that wine policy changed significantly from a policy Based on subsidising production and the protection of domestic markets from non-European producers, to a policy that aims to stimulate quality production and the competitiveness of the wine sector on the international scene. The Common Agricultural Policy and the EU domestic and international contexts have (probably) played an important role in the design of strategies for wine interventions. What is going on in the EU wine sector and what are the consequences of the wine policies on the market? This paper follows the evolution of EU wine policies through three main phases that, according to the authors’ point of view, have characterised the EU’s aims and strategies during the years of the reforms. Specifically, the authors focus their analysis on the budget expenditures of each phase (from 1970 to 2015) and the market response in the domestic and international scenario. The thread which runs through this paper is that the controversial aspects of the wine sector are urgent requests from wine farms to both policymakers to intervene with market laws and rules, and to the policy itself which aims to correct its own failings. EU policy has arrived late (too late) to understand the increasing threat posed by the competitive growth of third countries. After 46 years of implementation, the ‘classic dilemma’ between policymakers and markets, the tradeoffs between markets and policy, are still the drivers of EU wine policy.