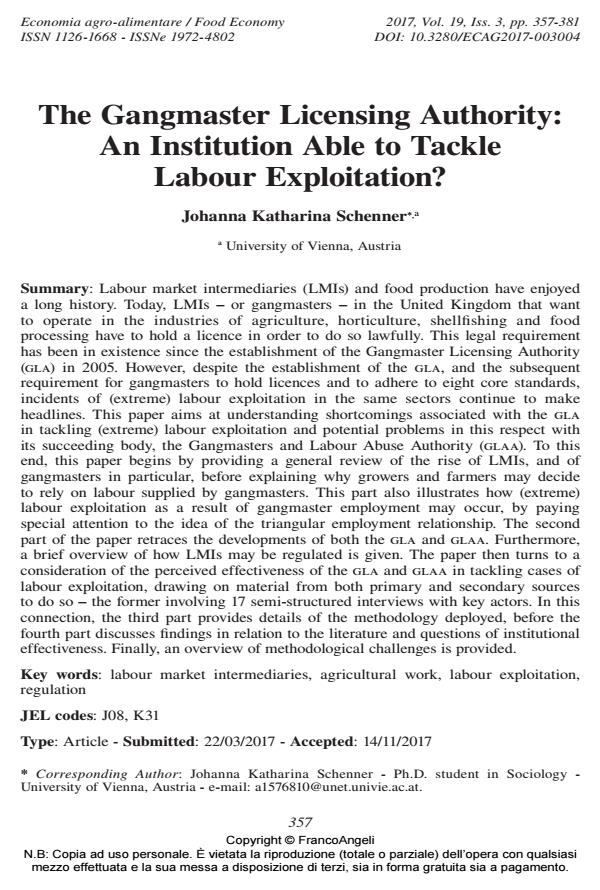 Labour market intermediaries (LMIs) and food production have enjoyed a long history. Today, LMIs - or gangmasters - in the United Kingdom that want to operate in the industries of agriculture, horticulture, shellfishing and food processing have to hold a licence in order to do so lawfully. This legal requirement has been in existence since the establishment of the Gangmaster Licensing Authority (gla) in 2005. However, despite the establishment of the gla, and the subsequent requirement for gangmasters to hold licences and to adhere to eight core standards, incidents of (extreme) labour exploitation in the same sectors continue to make headlines. This paper aims at understanding shortcomings associated with the gla in tackling (extreme) labour exploitation and potential problems in this respect with its succeeding body, the Gangmasters and Labour Abuse Authority (glaa). To this end, this paper begins by providing a general review of the rise of LMIs, and of gangmasters in particular, before explaining why growers and farmers may decide to rely on labour supplied by gangmasters. This part also illustrates how (extreme) labour exploitation as a result of gangmaster employment may occur, by paying special attention to the idea of the triangular employment relationship. The second part of the paper retraces the developments of both the gla and glaa. Furthermore, a brief overview of how LMIs may be regulated is given. The paper then turns to a consideration of the perceived effectiveness of the gla and glaa in tackling cases of labour exploitation, drawing on material from both primary and secondary sources to do so - the former involving 17 semi-structured interviews with key actors. In this connection, the third part provides details of the methodology deployed, before the fourth part discusses findings in relation to the literature and questions of institutional effectiveness. Finally, an overview of methodological challenges is provided.